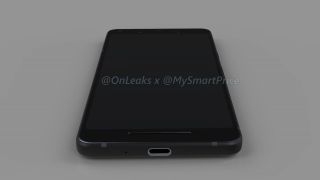 We seem to be experiencing something of a flurry of news about the upcoming flagship Pixel 2 and Pixel XL 2 phones from Google. Yesterday we had news about its speed, today we have more news about its looks.

We may now have a better idea of what the Google Pixel 2 and Pixel XL 2 will look like thanks to digital renders based on leaked CAD designs. The designs were apparently given out to accessory makers so we’re fairly confident that they will be accurate.

What adds further credence is that these leaks are provided by Steve Hemmerstoffer (who goes by the handle @OnLeaks), a trusted source for leaks.

The source of the leak (@MySmartPrice) has made a very attractive video for the renders, which you can see below.

The render doesn’t come as much of a surprise, given what we already know about the Pixel 2, and it closely follows the design of a number of other leaked images.

It is interesting to see that it is going to have front-facing stereo speakers and no headphone jack, confirming a rumor we heard back in March.

The lack of a headphone jack means that the Pixel 2 will join the ranks of phones to have dropped the 3.5mm port including the iPhone 7, Moto Z, and HTC U11.

It also looks like the Pixel 2 will have a brushed metallic finish and a fingerprint sensor on the back.

The glass back from the previous sneak-peak that we got looks like it is confirmed too.