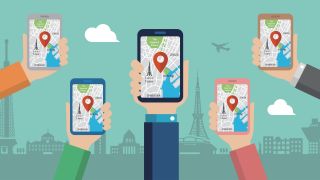 Google Maps now includes an augmented reality (AR) navigation tool, named Live View, which takes live footage from your phone's camera and superimposes navigation arrows over the top, making it much easier to see which turns you should be taking when you're walking.

Last week, it was discovered that Apple has applied for a patent for AR directions that would overlay route directions onto real-world footage captured by a phone's camera. Apple Maps has always struggled in comparison to Google Maps, and it looked like this might finally give it the upper hand.

However, it turns out Apple was way behind the curve – Google had been working on a similar features for months, and its Live View tool is already available as a beta.

The two AR applications aren't identical, though; while Apple's patent describes a tool that would be used for in-car navigation, Live View is designed to help you find your way around on foot.

The feature will be welcomed by anyone who's ever struggled to use top-down navigation in built-up areas, where it's sometimes tricky to see exactly which direction you're facing.

Some Google Pixel phone owners and Local Guides contributors have already been able to test Live View, but this week Google is now rolling it out more widely to Android phones that support ARCore and Apple phones that support ARKit (the platforms necessary for augmented reality experiences).