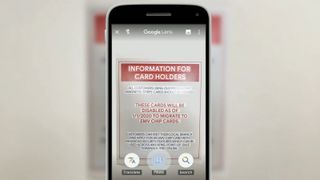 Google Lens is one of the most useful tools on Android phones, letting you scan barcodes and QR codes, recognize products, and translate languages. Now, it seems it's about to get a useful extra function, which is directly accessing it from the Chrome app to reverse image search and more.

This rumor comes from XDA Developers, which spotted a mention of a new Lens feature in the Chromium Gerrit, a collaborative code tool used by developers. The mention was for the feature 'Add support for intenting to Google Lens from the context menu.'

Apparently, when this code is used on an Android device, there's a small but noticeable change in the Google Chrome app.

Currently, when you press and hold on an image in the Chrome app, one of the options is 'Search Google for this image'. This reverse image search tool is a useful function for people who want to find the origin of a picture.

With the line of code, however, this option is replaced with 'Search with Google Lens'. Previously if you wanted to search an image with Google Lens, you had to opt to share it, then select Google Lens from the range of options – now this process is significantly streamlined.

Why is the Google Lens change useful?

Google Lens doesn't just search for the source of an image, like the reverse image search, but can analyze the image for more details. If there's text on it, Google Lens will read it, and if the text is in another language it will translate it.

Thanks to the plethora of features, you can basically get any piece of information you need from an image, and now you can access Google Lens easily from Chrome, which is probably your main source of images anyway.

While this feature looks fully-fledged, we're not sure when we'll see it come to Android devices, though we'll let you know once it is out.