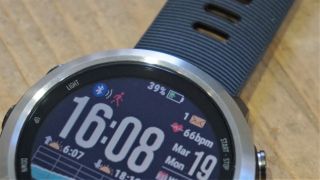 The Garmin Forerunner 645 Music is an excellent running watch in many ways, but is let down by the fact it didn't launch with the promised headline features.

Given it's called the 645 Music, not having the streaming services available from day one was a bit annoying - but in Taiwan, things are different.

Not only does the watch come with access to loads of songs to play offline from service KKBOX - which you can't get from Deezer or iHeartRadio yet in other territories, despite being announced at launch - it'll also have a beat-matching function.

Sadly, this isn't a dynamic option where the song will change depending on your heart rate or intensity, but still having a selection of songs by beats per minute will be handy.

Hope for the rest

We're pretty certain that KKBOX will be available at launch for Garmin Forerunner 645 users, given that the watch comes with a 30 day trial out of the box - and if that's the case, the tech needed to enable Deezer and iHeartRadio to play offline content might not be too far away.

Taiwan also has banks signed up from the outset for Garmin Pay, allowing contactless payments - this isn't something every territory around the world has yet either.

However, the fact that takes a little longer is probably a good thing - each bank signed up needs to confirm the contactless payments are secure and working correctly with its system, so you can be sure your money is safe.

Hopefully these new features will be rolling out at a wider level around the world soon - it'll improve the watch that didn't impress us so much thanks to missing out on these key elements.