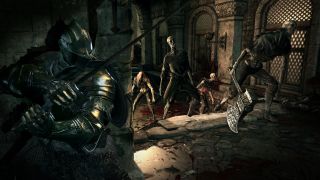 Dark Souls is known as a punishing video game series. The game rewards an encyclopaedic knowledge of where enemies are going to appear and tucks treasures, like flaming longswords and industrial-strength armor, in crevasces for only the most ardent of players to find.

It's this method of rewarding its most resilient fans that makes developer From Software's series so beloved by a growing niche audience. For the rest of us – the ones that run from room to room haphazardly, missing the myriad treasure chests and secret doors – however, death comes quickly and relentlessly.

I expected that I'd need to take that careful approach ... how wrong I was

Getting to play Dark Souls 3, I expected it to be as hard as its two-year-old predecessor, Dark Souls 2. I expected that I'd need to take that careful approach; for my character's maximum allowed health to deplete after every death and restorative potions to be sparse.

How wrong I was.

The Dark Souls 3 I played at a recent Namco Bandai (the game's publisher) event held in an actual castle in Napa, Calif. had almost zero resemblance to the Dark Souls game I imagined I'd be playing.

By no means was the game easy. (Hell, in my one-hour demo, I died close to 20 times.) But it utilizes gameplay mechanics, some from past games and a few new ones like "Battle Arts," that make this rendition the easiest (and most accessible) Dark Souls game I've yet to play.

Two features come back from the dead

Typically, new features are the ones worth talking about. But Dark Souls has teeter-tottered on key gameplay elements from game to game, making some more difficult than others. By that reasoning, it's not only what Dark Souls 3 adds to the series but what it returns to that makes it so interesting.

Easily obtained Estus Flasks – What made Dark Souls 2 so hard was that, for the most part, you had to rely on one-time-use healing items called Lifegems. They dropped often, but run into a difficult boss and your whole inventory of 20 or 30 might be reduced to nothing.

Dark Souls 3 bucks that trend and returns to its original Dark Souls roots by providing the player with copious Estus Flasks – multi-use healing items that are replenished at every checkpoint or after every death. While it was definitely designed to be easier than the full game, the demo gave me 10 of them to use from the start. (That's more than enough to get from one checkpoint to the next or fight a boss over and over again without needing to restock.)

Your health doesn't deplete – Read any forum and the biggest complaint about Dark Souls 2 was that every time you died, your maximum health dropped a little bit more. The process of dying actually made the game harder to play, and while you could argue that this crippling mechanic simulates the real-life fear of death, it can be downright annoying.

The good news? You won't lose health every time you die in Dark Souls 3, at least if the demo is any indication of what the full game will be like.

The Art of War

Let's be honest: In a series as hard as Dark Souls, having enough health to scrape by from area to area is only half the battle. You're going to need some way to fight back against the hordes of undead monsters and enormous, two-shots-and-they-kill-you bosses.

To rectify the lack of weapon options in the past, Dark Souls 3 is introducing a new system called Battle Arts that can be used alongside basic attacking moves like light and heavy striking to break your enemy's guard or perform a fury of attacks to multiple enemies at once. Battle Arts are best thought of as special combat abilities, activated by hitting the left trigger on either console controller.

The character I chose, the Warrior, could use a Battle Art that released a blast that pushed nearby enemies backwards, stunning them briefly.

This particular move sounds simplistic or perhaps not really all that useful, but considering the amount of time you find yourself fighting in narrow stairwells or slim doorways, it will no doubt often come in handy. The final game will have dozens of these Battle Arts, which will change based on what weapon you're wielding at the time.

Despite everything - the added health, the extra healing items, the Weapon Arts - it's not enough to make the game easy. You'll still die, it's inevitable. But at least this time you'll be given more of a fighting chance before you face your untimely death.