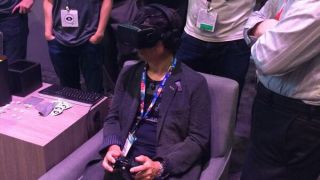 You don't make friends with VR

Miyamoto took the Oculus Rift for a spin at this year's E3, and while we don't know what he experienced on the headset, we now know a little more about his thoughts on virtual reality as a whole.

The upshot? Don't expect Nintendo to wheel out the Virtual Boy 2 any time soon. Speaking to Time, Nintendo's Shigeru Miyamoto said he was unconvinced by the type of experiences virtual reality offers for console gamers.

"When you think about what virtual reality is, which is one person putting on some goggle and playing by themselves kind of over in a corner, or maybe they go into a separate room and they spend all their time alone playing in that virtual reality, that's in direct contrast with what it is we're trying to achieve with Wii U," he said.

"And so I have a bit of uneasiness with whether or not that's the best way for people to play."

While he's probably got a point, Sony, Oculus, Samsung, and probably Microsoft (if rumours are to go by) all see a big future in VR. But Nintendo has never been one to follow the rules, so if you're hoping for some immersive Mario Kart VR on Wii U any time soon (as brilliant as that sounds) - don't hold your breath.

However, Miyamoto did add that Nintendo could potentially approach VR from a different angle.

"There's interest in the technology, but we think it might be better suited to some sort of attraction style of entertainment, say something at a video game arcade or things like that, rather than something that one person plays alone."