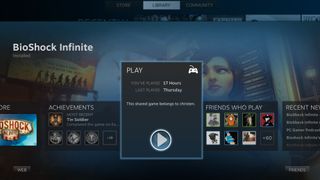 Great news for friends and family members who don't want to spend money on the latest installment of (fill in the blank) game.

You can lend your gaming library to others and let them to download and play, earn their own achievements and save to Steam's cloud without interfering with your own. It works in reverse as well, so you can request permission to play a friend's games.

Family Sharing lets 10 computers share one library at a time where up to five different accounts can use any of the aforementioned computers, similar to how you can sign up a certain number of computers for iTunes.

If you're worried your loved ones will somehow ruin your account, don't fret - you'll always have access over those you've given permission to peruse your library.

Cue the requests (and bribery?)

Have a game on your wishlist but not the dough? Simply send a request to a friend and if the person is willing, voila, you're set.

Of course, there are caveats. You both can't play from the same library simultaneously; Steam notes that "a shared library may only be accessed by one user at a time." This means if you're playing on a borrowed account and your friend wants to hop back on, you'll be prompted to quit or buy your own game.

Additionally, region restrictions are still the same. Titles that need a third-party key, account, or subscription in order to play cannot be shared between accounts either.

But for the most part, as long as the borrower is trustworthy and it's an available title, seems like their Steam library is fair game.