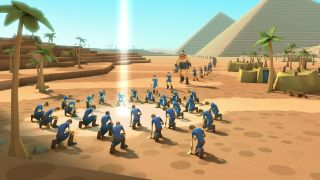 'I proved to myself that making the transition from console to mobile is possible, but it's very, very difficult'

For TechRadar PC Gaming Week, we revisit the following interview that was conducted with Molyneux in 2014.

As Rock, Paper Shotgun recently pointed out, Peter Molyneux's Godus is in a spot of bother. Possibly quite a big spot.

We sat down with Peter in December to talk about the challenges his mobile game has faced so far, his regrets with Kickstarter, and his opinions on solving the free-to-play problem.

Godus save us all

When we met with Peter Molyneux a year ago, he was enthusiastic, optimistic and excited. He beamed with that child-like wonder that only Molyneux can. Now the Theme Park creator talks with a tone of caution, even regret.

The last 12 months have been trialing. Molyneux hasn't only ventured into the bold new world of mobile gaming, he's also walked the precarious path of free-to-play. The reception to Godus, his 'reimagining' of Populous, has been a mixed bag all the way from its early Kickstarter birth to its launch. That's not to say he regrets making it. But it's safe to say that in the space of a few months, Molyneux has learned some invaluable lessons.

"I think what ends up happening, and what ended up happening with Godus, is that people get a view of what the game is going to be like from what you've said here, and that view quite often from what the final game is. And there's this overwhelming urge to over-promise because it's such a harsh rule: if you're one penny short of your target you don't get it. And of course in this instance, the behaviour which is incredibly destructive, which is 'Christ, we've only got ten days to go and we've got to make a hundred thousand, for f**ks sake lets just say anything'.

"I think what i've also learned, is that doing Kickstarter and Steam Early Access before you've got something which is defined and playable is a hugely risky undertaking that can be very destructive to the final quality of the game."

Freemium has become a dirty word. You might think that companies like EA would be the ones setting a good example, but go tell that to anyone who had their childhoods ruined by Dungeon Keeper earlier this year. Even Apple has changed the dialogue of its app store so that the little button that once read 'Free' now reads 'Get' on games with in-app purchases.

"For certain genres of game, the free to play model has got a bit fairer," argues Peter. "If you look at how [Supercell's] Boom Beach has evolved it, and what's been happening on some of the other apps, it's not nearly so harsh. It's far less 'you need to introduce five friends' or 'you need to spend 50p or you can't go any further'. That's got fairer. The disappointment however, and I include Godus in this I think, is that the free-to-play model hasn't evolved and spread out to other genres. So that free to play model is great for certain games, it's great for car battle games, it's great for world builder games like Clash of Clans - it's just not as good for open-ended open world games like Godus.