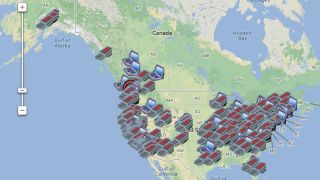 The Quake software on Dr Elizabeth Cochran's laptop probably isn't the one you're familiar with: the Quake-Catcher Network she created uses sensors originally designed for gaming hardware to detect earthquakes. The same accelerometers that can detect a laptop in free-fall or the twists and turns of a handheld device turn out to be pretty handy for detecting the earth's movement too. Dr Cochran had the idea while "playing around on a Mac laptop... it dawned on me that if it picked up [my] movement, it would probably pick up earthquake movements."

Dr Cochran was right, and today's QCN uses a mix of volunteers' computers and small USB-connected sensors to warn about major seismic events. As US Geological Survey director Dr Marcia McNutt explains, "even a few seconds or warning before an earthquake can reduce the loss of life and property."

By creating cutting-edge technologies and manufacturing them in massive quantities, gaming firms make those technologies cheaper and cheaper - so for example the sensors used by the Quake-Catcher Network can be given away for free in high risk areas and cost just $49 for anybody else ($5 for teachers), compared to $40,000-plus for traditional seismic sensors.

Scientists were quick to spot the potential of Microsoft's Kinect too. Compared to the $10-20,000 for Light Detection and Ranging (LIDAR) mapping equipment, $120 for a Kinect is loose change - and while it can't see anywhere near as far as professional hardware, it's still proving to be a useful tool. Ken Mankoff of the University of California Santa Cruz has used it to survey glaciers and rivers, and a team at Microsoft Research Cambridge is exploring its use in medical imaging.

Kinect is being used in Paraguay to record ancient artworks facing destruction, and it's being used to control robot cockroaches for applications where even drones are too big. You can use it to control big robots too.

Kinect has life-saving potential too: students at John Hopkins University are using Kinect to detect when children are left in locked vehicles, something that currently kills 38 children per year in the US.

If you think that's impressive, how about fighting cancer, battling AIDS and charting the human brain? Gaming tech is doing that too.

Supercomputing on a budget

One of the most significant pieces of gaming technology is the GPU, or Graphics Processing Unit. The same technology that originally delivered 3D PC games now powers the world's fastest supercomputers, and as a result it's at the cutting edge of scientific computing.

Sumit Gupta is general manager of the Tesla Accelerated Computing Business Unit at NVIDIA. As he told Techradar, "Scientific study is increasingly relying on being able to simulate experiments ahead of or instead of the real-life execution. The reason for this is twofold. First, the cost of using virtual equipment over expensive lab materials is much cheaper.

"Second, experiments have become so complex that the need for simulation is imperative in order to get results in a reasonable timeframe. A team of ten working on a vaccine for bird flu could perhaps run five or six experiments in a day and to ensure the results are accurate these experiments would need to be repeated several times."

Enter the GPU. "CPUs are designed to run one process at a time, crunching the data then moving onto the next problem," Gupta explains. "A GPU, on the other hand, has the ability to run multiple processes at once. When used for science, the GPU can therefore be utilised to run thousands of virtual experiments per minute giving reliable results at a fraction of the time."

That's important, because humans simply aren't smart enough to create the most complex models themselves. Take climate change analysis: you need to analyse hundreds or even thousands of years of data on climate and temperature. "A modern day supercomputer [can] process it in a matter of hours," Gupta says.

So how much do desktop GeForces have in common with their supercomputing siblings, such as NVIDIA's Teslas? "All GPUs have the same basic architecture, be it powering some of the world's fastest supercomputers or blasting through Splinter Cell Blacklist on your PC," Gupta says.

The GPUs handle the most computationally intensive tasks, and on a gaming PC that means high frame rates and smoother gameplay. On Tesla cards, however, the processing isn't designed to drive a display, but to process huge quantities of data" - usually via the programming language CUDA.

We asked Gupta which applications he found particularly exciting. "It is hard to pin down the most exciting areas of work," he says. "Be it helping in the search to cure HIV, building neural networks (computers designed to act like a human brain), helping send a rover to the moon, and even desktop virtual reality therapy treatments for those with post-traumatic stress disorder, it is an incredible time for GPU-based science."

Fancy donating your graphics card's spare capacity to help the wider world? The BOINC (Berkeley Open Infrastructure for Open Computing) enables you to do just that. There are BOINC projects for astrophysics and mathematics, climate analysis and epidemiology, molecular biology and nanotechnology. BOINC projects are helping scientists solve AIDS research problems that have puzzled them for years, are pushing the frontiers of brain research and are playing crucial roles in the fight against degenerative diseases, genetic conditions and cancer.

So much for videogames being bad for you.