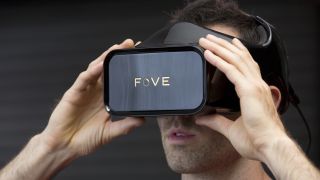 The VR market is incredibly crowded all of a sudden but Fove thinks its eye-tracking technology can help it stand out - as the software knows where you're looking without you having to turn your head.

It's currently raising funds on Kickstarter and has gone way beyond the original $250,000 target. Now the developers have announced a new partnership with Valve to give it some extra credibility.

If the campaign reaches $700,000, Fove says it's going to add support for the Valve VR and OpenVR SDK platforms, essentially giving it greater compatibility with games developed for Steam and the HTC Vive.

Fove will also "pursue" compatibility with Valve's Lighthouse body-tracking tech once it reaches the $700k goal, the company says: that means your hands, arms and feet can be tracked as well as your eyes, for the complete VR experience.

Teaming up with Valve and adding support for the Steam platform could make a crucial difference for the long-term viability of the Fove, as it battles the mighty Oculus Rift and other headsets backed by the big names.

If all goes to plan, developer kits should be sent out at some point during the spring of 2016. Fove CEO and co-founder Yuka Kojima says he's confident that the kit can deliver "a revolutionary experience" for VR enthusiasts.