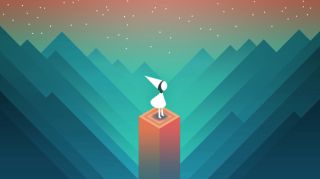 TechRadar's just come out of a weird, trace-like state. There was a totem with an eye on it. A ghost. And people with crow heads that would NOT stop squawking at us.

Meet Monument Valley, a perspective-shifting adventure that would get M. C. Escher's blood pumping. Packed with levels that deceive and puzzles that challenge but never quite frustrate, it's short and sweet - you'll probably complete it in an hour - but Ustwo's game has got more "ahhhh" moments than its asking price owes.

Valley puts you in the shoes of Ida, a hat-wearing princess in a surreal landscape, as you twist, bend and rotate your way through 10 3D spatial levels to an enchanting soundtrack. In case you haven't already worked it out, we think it's rather brilliant.

Have we sold it yet? Just go and play the damn thing already (if you're on iOS - an Android version is on its way). It's not every day the humble smartphone bags a game of this calibre.

Ok, so onto the bigger news of the week: Amazon Fire TV.

We all knew that Amazon's streaming box would double as a games console, we just weren't certain as to the extent of the company's gaming ambitions.

Though Amazon says it doesn't plan to compete with the PS4 and Xbox One (it even said it's "absolutely not a game console") its behaviour still suggests that it's about much more than simply putting Android games on the TV.

Then we have the Fire TV gaming controller. It's not the most inspired design but it actually exists. However Amazon's decision to offer its gaming controller as an optional extra and not include it in the box does send a message that it's not ready to go the whole hog yet. Yet.

As this part of its business grows, who's to say what will happen? But for now, just the very fact it's claimed a stake in this space will inevitably have ramifications for everyone - Amazon's entry price is very, very low - and could be the first decent microconsole on the market, given time.

Poor Wii U, it hasn't had the best of starts. But if anything can revive the ailing console, we reckon it's Mario Kart 8. And if it doesn't, we're going to play it to death anyway.

The past few months have seen Nintendo teasing tidbits about its Wii U racer, and this week it had a proper splurge with a bunch of sexy new footage.

Sure, it's got all the trappings of another typically superb, glee-filled, throw-the-controller-across-the-room-because-f*%k-that-blue-shell Mario Kart game. But most surprising of all, we found ourselves drooling over just how good it looks graphically. Don't look so surprised. We certainly weren't the only ones.

Mario hits the track again on May 30.

Revving up for Mario Kart 8? You'll need our guide to The Best and Worst Mario Kart Tracks

ONM's gone Mario Kart 8 mad this week. See what all the fuss is about by watching the brand new trailer, featuring new courses and items.

If that's not quite enough video evidence of why this is the year's most exciting game yet, check out our video rundowns of all 16 courses we've played so far.

Things to do in Watch Dogs when you're Guay

What's coming up at the box office? Find out with out with epic guide to New Movies Coming to the Cinema

Sweet dreams or total nightmare? Find out in our 50 Best Movie Dream Sequences