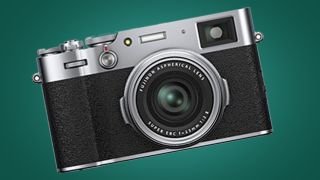 It's one of the most anticipated cameras of the year, and we now have a leaked image of the Fujifilm X100V to add to the specs we've previously seen for this exciting rangefinder compact.

We're already fairly confident that the X100V is going to have a new 26.1MP sensor (the same as the one in the Fujifilm X-Pro3), improved autofocus and a refreshed version of the 23mm f/2 lens on its predecessor, the X100F.

But now a leaked image from the usually reliable Japanese site Nokishita has filled in some of the design elements we weren't quite sure about. The image shows that the X100V, unsurprisingly, looks very similar to the X100F, though there appear to be some small tweaks.

These include what appears to be a slightly different faux leather finish, a smaller built-in flash and a tweaked position for the viewfinder switch.

Despite the leaked front-on image, a few questions do remain unanswered. Will the X100V have the same ISO dial, which is built into the shutter speed dial, as the X-Pro3? And are the dials as smooth as they appear in the leaked photos we've see previously? We'll likely need to wait until February 4 to find out for sure.

Those kind of design details are only likely to be important for hardcore X100 fans, though – for everyone else, the most important new features are the new two-way tilt screen, new sensor and improved autofocus.

These mean the X100V will be far more versatile for street shooting from varied angles, which is the natural habitat for such a small, powerful camera. It's unlikely the screen will tilt in three directions, like the on the X-T3, but it's a big new feature that could tempt existing owners to upgrade.

Another bonus is that the X100V is likely to be powered by the same sensor and autofocus system as the relatively new X-Pro3, which means we can expect 425 focus points that cover 99% of the sensor, plus improved Face and Eye Detection.

Combine all this with the large APS-C sensor and that classic retro styling and you have what's shaping up to be the finest X100 series camera so far. We'll bring you all the official news, including the pricing and release date, as soon as we get it from Fujifilm.