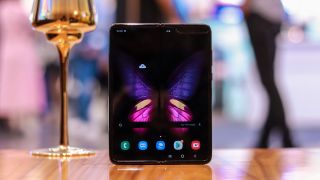 The Samsung Galaxy Fold was arguably the most exciting phone of this year, and we may have just seen its successor, as live photos of what's said to be the company’s next folding phone have surfaced.

Previously, we hadn't heard or seen much of this device, but that just changed, with live photos of Samsung’s upcoming foldable smartphone surfacing on Chinese social networking site Weibo.

It's the first time we've seen a clamshell-style foldable from Samsung, murmurs of which were heard throughout 2019. Unlike the original Galaxy Fold, this will be a normal-sized smartphone that can be folded in half to become something much more pocketable.

Taking a closer look at this upcoming Samsung foldable, it seems to opt for design and materials that were previously seen on Samsung mid-rangers. The back has a dual-camera setup beside what looks like a secondary OLED display. The display, when unfolded, will have a tall aspect ratio, possibly crossing 21:9. An Infinity-O notch can also be seen on the top.

The hinge is not very clear, but it looks like the reinforced one that Samsung put on the reincarnated Galaxy Fold with extra lugs that would stop foreign objects from penetrating inside. The crease along the display is still obvious.

The original Galaxy Fold was a full-fledged flagship with high-end internals, six cameras, a big battery, and a display that would make it a part-time tablet. Even after a long delay where Samsung recalled the product to fix and improve it, it was one of very few foldable smartphones that managed to ship in 2019.

Needless to say, Samsung must’ve learned a lot and is going to experiment with a few other designs in the coming years to establish its leadership in this space.

Earlier rumors suggested that Samsung will unveil a cheaper foldable next, and this one seems to tick all the boxes that back that - a smaller display, different material choice and fewer cameras.

It may join the 2019 Moto Razr as the second clamshell foldable in the market but will seemingly skip on the cool flexible hinge mechanism, which lets it shut completely close. It’s unclear if this Samsung foldable will be able to do that.

As for the name, we don’t think this specific device will be called the Galaxy Fold 2, as Samsung would like to reserve that name for a flagship device that is significantly different than 2019's one. Perhaps this will be a part of a new series of “affordable” foldables.

The Samsung Galaxy S11 series is slated to launch in February of 2020 and is likely to be joined by a new foldable smartphone too. It may be the one pictured above, but we won't know that for certain for a while.