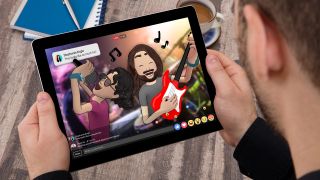 Facebook is all about live video and virtual reality these days, so why not combine both?

Facebook Spaces is a virtual reality playroom and chatroom in one, a hangout app that lets multiple people wearing Oculus Rift VR headsets interact in the same virtual space. It's still in beta, but we got to try it at Facebook's F8 2017 conference, and deemed it the most fun we've ever had in virtual reality.

One of the reasons is that you can still interact with people in the real world. During our demo, we were able to have a Facebook Messenger video call with someone who wasn't wearing a VR headset. With today's new feature, Facebook is taking this physical / virtual connection to a whole new level.

With live video, Facebook Spaces users can start a live broadcast and beam it to their Facebook feed. Those not in Facebook Spaces can watch and interact with the video, leaving comments and reacting in real time.

One neat feature is the ability to pull out real-world viewers' comments as an object in the VR world. The comment becomes a card and serves as a way to highlight a question or compelling comment (or, let's be real, probably a killer joke) that everyone can see.

Introducing live video to Facebook Spaces is yet another way Facebook is looking to turn VR into a social experience, blending the real and virtual worlds in compelling ways. We actually can see this be useful for school and business situations, though remember you'll need at least one Oculus Rift headset to use Facebook Spaces.

Oculus Rift and Touch controllers are currently on sale for a whopping $200 off, bringing the price to $399 on Amazon USA and £399 on Amazon UK.

Facebook Spaces is available in beta in the Oculus Store, and if you've got an Oculus Rift, you can start going live today.