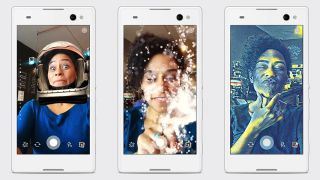 If you thought Facebook was running out of ways to help you bombard your friends' News Feeds, think again.

It appears the social media giant is testing out a new feature for its mobile app that allows you to make your own GIFs, according to The Next Web.

Found in the upper portion of the app's camera, the GIF maker seemingly allows for short, looping video that can be augmented with effects and captions.

Facebook on iOS now lets you create your own GIFs pic.twitter.com/UpJANRfCfGJuly 14, 2017

It appears the GIF-making feature is not available to all users at this time, suggesting those who currently have their hands on it are part of a small test or the update is rolling out slowly.

Additionally, it's suspected that Facebook's newest trick will roll out primarily to iOS devices before making its way to Android. We've asked Facebook for more information and will update this story as new details emerge.

Though the new GIF-making feature hasn't been confirmed yet, we still look forward to the day we can resume posting short, looping posts for our Facebook feed — things just haven't been the same since Vine shut down, you know?