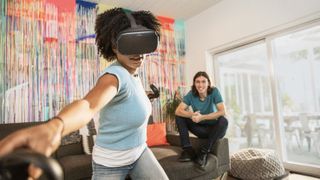 Facebook wants its own mobile operating system so hardware like its Oculus VR headsets isn't tied down by the limitations of Android.

As reported by The Information, Facebook wants its own platform to avoid other companies throwing its plans off course, whether it's built in-house or in partnership with another developer.

"We really want to make sure the next generation has space for us,” said Andrew Bosworth, Facebook’s vice president of hardware, Andrew ‘Boz’ Bosworth. “We don’t think we can trust the marketplace or competitors to ensure that’s the case. And so we’re gonna do it ourselves.”

The company told TechCrunch that it's particularly interested in developing augmented reality glasses, and is exploring all options to make it a possibility on its own terms.

If at first you don't succeed...

This isn't the first time Facebook has considered creating its own operating system. Back in 2013, one of the company's senior developers revealed that it had considered developing an OS for Facebook Home – a project that replaced your phone's usual home screen with something based around social features.

Facebook considered building an OS from scratch or creating an Android fork before settling on an interface layer that sat on top of Android and simply changed its regular interface. The app received negative reviews, and was abandoned within months of its release.

"The OS path was the least fleshed-out of the paths," director of mobile engineering Cory Ondrejka said.

"Mark [Zuckerberg] talked on launch day that he wanted to build something for everyone. It's hard to get to the type of scale that's necessary for us [when building an OS]. We wanted Home in front of hundreds of millions of people – even a successful OS would only give that experience to a few of them."

However, now that Facebook has extended its reach beyond phones to other hardware, it makes sense for it to revisit the idea.

Facebook has no plans to end development of its iOS and Android apps, but it'll be interesting to see where this new project leads and whether its new direction proves more successful than Facebook Home.