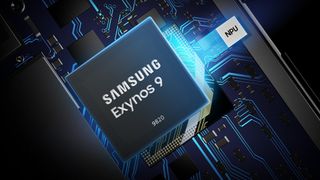 One thing we can be fairly sure of about the Samsung Galaxy S10 is that in most regions outside the US it will be powered by Samsung's latest high-end Exynos chipset, and it's just been announced.

The Exynos 9820 should provide a big boost to gaming too, as Samsung claims its Mali-G76 MP12 GPU offers a 40% improvement in gaming performance or 35% more power efficiency.

So in short, the Exynos 9820 should be able to deliver a lot more power and be more efficient than its predecessor, meaning your battery should go further.

That efficiency is built in from the ground up, as the Exynos 9820 is an 8nm chipset, which reduces power consumption by up to 10% compared to the 10nm Exynos 9810.

It’s worth noting however that rival chipsets like the Kirin 980 in the Huawei Mate 20 Pro and the A12 Bionic in the iPhone XS are already 7nm, so could be even more efficient.

Other things to note about the Exynos 9820 are that it includes an integrated NPU (neural processing unit), allowing it to carry out AI tasks over seven times faster than its predecessor. The chipset also supports displays with resolutions of up to 3840 x 2400 or 4096 x 2160, single lens cameras of up to 22MP, dual-lens ones of 16MP, and 8K video recording at 30 frames per second.

Mobile download speeds meanwhile can theoretically reach 2Gbps with this chipset, though this isn't 5G we're talking about, as the Exynos 9820 doesn't support that.

Interestingly, Samsung is rumored to be working on a 5G version of the Galaxy S10, so if true then that would have to come with a different chipset – perhaps Samsung will even have a 7nm one ready for that.

Still, the Exynos 9820 sounds like a big upgrade on Samsung's current chips and should be good enough to make the Samsung Galaxy S10 one of the most powerful phones of 2019, just as we'd expect it to be.