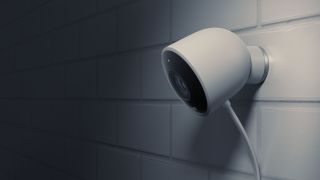 Nest is set to expand its existing lineup of smart security devices with the addition of an outdoor security camera called the Nest Cam Outdoor which features a 1080p resolution and 130 degree viewing angle.

Previous Nest cameras were for internal use only, but the new camera (including its power cable) will survive being rained on, although it's not waterproof enough to survive being fully submerged.

As well as waterproofing, Nest has also built a speaker and microphone into the outdoor camera, allowing you to speak directly with say, a delivery driver, to let them know where to leave a parcel.

The speaker, microphone and camera feed itself can be accessed from the Nest app on your phone.

In addition to the outdoor camera, Nest is also upgrading its software to allow it to alert you if a human figure enters a predefined area of importance.

For example, if your security camera overlooks the road you could previously set the camera to ignore movement in the road area, but send an alert to your phone if any movement occurs closer to your house.

The camera is able to tell the difference between a neighborhood cat and a delivery man, which should hopefully lead to a lot fewer false notifications from the app, as previously it found this tricky.

The Nest camera looks like it could be excellent for anyone who's tired of the hassle of having parcels delivered to an empty home, but we are less convinced by its abilities as a security camera.

There are two issues here. First is the fact that the camera is not bolted to the wall, it's magnetically attached. This should make it easier to install, but will also mean that if it's within arm's reach a potential intruder could easily pull it off its magnetic base.

Second is the power cable. Nest's representatives were bullish in their defence of the decision not to rely on batteries (like the Ring for instance) for the security camera, but it's hard not to worry that any potential intruder will simply unplug the device's power cable before acquiring entry.

Prior preparation and planning required

These problems aren't deal breakers since with a little planning you should be able to avoid them by placing your camera and power cable out of arm's reach, or placing the camera such that it will be able to record any intruder that attempts to disable or remove it.

Nest's aim with the outdoor camera is to bring a professional level of security to the home, but these issues show the difficulties even the pros must face when installing security systems.

But Nest's efforts to create a truly simplistic home security system might prove to be impossible due to the difficulties of making a system that isn't susceptible to being circumvented by intruders.

We should be able to find that out come September when the Nest Cam Outdoor is released in the US for US$199. Meanwhile a UK release has been promised before the year's end with it's price still unknown.