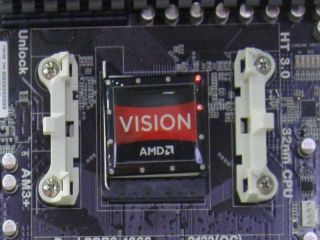 The new AM3+ socket

This morning at Computex 2011, AMD announced the launch of it's 9-series motherboards. But there was something missing - the advanced CPU component of its new platform.

We've got a slew of reviews of AMD's latest boards on their way, so hold tight for the first few very soon.

The real "key component" of the Scorpius platform, however, are those Zambezi, Bulldozer-based CPUs and they're still a way away from being released AMD confirmed today.

So the jury is out about whether we should be excited about this new chipset.

Especially when we haven't seen a new CPU architecture from AMD essentially since the Hammer architecture made its debut around 2003.

For a long time the buzz was the brand new Bulldozer CPUs would be unveiled here at this year's Computex. They are a bold new step in the way high-end processors are put together.

Sadly we found out before the show this wasn't the case. Sources in the industry speculated that we would in fact be waiting another three months for the new processors.

Yesterday that was confirmed by AMD to one of its partners and now today AMD has gone public with the fact that around ninety days from today we ought to see the first Zambezi CPUs hitting our 990 motherboards.

AMD is apparently moving directly to a B1 stepping of its architecture, one source told us on the show floor, though we don't know exactly what happened to the B0.

That though was quickly skipped over by Rick Bergman, Senior Vice President and General Manager of AMD, at this morning's press conference.

Instead he was talking up the incoming high-end accelerated processing units (APUs) in the shape of the new A-series Llano and Trinity chips.

Unsurprisingly he also skipped over the fact that, without a CPU, manufacturers and experts all agree: the only interesting thing about the new AMD 9-series motherboards is the fact that for the first time you can natively run Nvidia SLI on its chipsets.

Though Nvidia cards don't currently operate at their fullest with AMD CPUs, we may still be waiting for the launch of the Zambezi CPU for that to be truly relevant too.

The Zambezi CPU, to give it its due, is AMD's first eight-core beastie on the desktop and should make a splash when it finally debuts.

Though actually they're not really cores as we know it. Each of the Bulldozer modules will be almost analogous to a dual-core CPU, so effectively this quad-module (can we coin 'quad-mod' now?) CPU will be almost equivalent to an eight-threaded CPU from Intel.

The Sandy Bridge Core i7 2600K should look out then. But then maybe that's why we're having to wait...