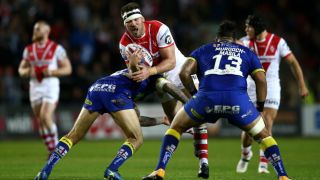 St Helens and Warrington head to Wembley today for the first ever meeting between the two sides in the 2019 Challenge Cup Final.

The match marks Warrington's third appearance in four seasons in the final, and they'll be hoping for a better outcome this time out having been the losing side on each of those visits to the capital. Will they make it a winning Wembley visit this time? Watch all the St Helens vs Warrington action live, even if the match isn't been shown where you are, with our Rugby League Challenge Cup live stream guide below.

Challenge Cup Final 2019 – where and when

London's iconic Wembley Stadium is the venue for all the action, with kick-off at 3pm BST.

Currently sitting pretty at the top of the Super League with a massive 16 point gap between them and their opponents, St Helens go into today's game as clear favourites.

Saints coach Justin Holbrook will be hoping his side will maintain their impressive form which has seen them go unbeaten so far in August, and they'll be boosted by the return from injury of Alex Walmsley, Lachlan Coote, James Roby and Joseph Paulo.

Despite their semi-final win against Hull FC, Warrington haven’t won a Super League game since the start of July. With star half-back Blake Austin left out of the 19-man squad due to an ankle ligament tear, coach Steve Price and his team will need to dig deep to pull off a shock win.

This afternoon's match brings together two of the tournament's most successful clubs, with St Helens having won the cup 12 times and Warrington on eight wins. However, it's been 11 years since the former last won the cup, while Wolves haven't tasted cup glory since 2012.

Which team will end their drought? You can watch all the drama unfold as it happens by following our St Helens vs vs Warrington Wolves Challenge Cup live stream guide below.

The great news for rugby league fans in the UK is that the 2019 Challenge Cup Final will be shown for free in the UK, with the game being broadcast live on BBC One. Today's coverage commences at 2pm.

You'll also be able to live stream the action from Wembley (and catch up) via BBC iPlayer on your laptop, smartphones or tablet.

if you're not in the UK but want to catch up with any of the BBC coverage, then you'll need a VPN to relocate your IP to the UK and get around the region restrictions.

How to watch the Challenge Cup final 2019 from abroad

Out of the country this weekend? Badly times holiday or work trip? Try to watch that BBC stream and you'll quickly find that it's geo-blocked.

That's super annoying, but not unavoidable. We've found that using a Virtual Private Network - or VPN - to be a handy solution. You select a server in your country and then watch as if you were sat back at home on your couch.

Once installed, you simply open the VPN app, hit 'choose location' and select the appropriate location - it's super easy to do. Choose a server in your home country and watch the Challenge Cup final as if you were back there.