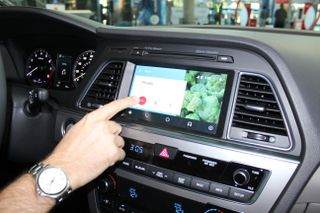 Silicon Valley is quickly shifting gears to create software capable of powering the next generation of automobile dashboards, but at least one Japanese automaker plans to keep that work entirely in-house for the time being.

As part of a larger piece documenting Google and Apple's efforts to power car dashboards, The New York Times reported Sunday that Toyota "currently has no plans" to adopt either tech titan's automotive platform in the United States.

Toyota's National Manager of Environmental, Safety & Quality Communications John Hanson confirmed that neither Android Auto nor CarPlay were on the automaker's roadmap, despite frequent talks with both Google and Apple.

"We may all eventually wind up there, but right now we prefer to use our in-house proprietary platforms for those kinds of functions," Hanson said.

Bumps in the road

Toyota certainly isn't dismissing the concept of incorporating smartphones into automobile dashboards, which are being positioned as one of the next great battlegrounds between industry heavyweights like Google and Apple.

Unlike Toyota, automakers like General Motors, Audi and Japanese rivals such as Honda and Hyundai were quick to jump on the Android Auto bandwagon, which is now backed by nearly two dozen manufacturers.

Many of these brands intend to also throw their support behind Apple's CarPlay, a competing system exclusive to the iPhone, while Android Auto works with a variety of smartphones running Google's mobile operating system.

Both of the voice-activated dashboard platforms have been slow to roll off the assembly lines, with Ford estimating all of its vehicles sold in the US will incorporate either Android Auto or CarPlay into the automaker's SYNC system by the end of 2016.