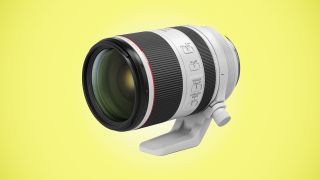 Are we about to see new telephoto lenses from Canon? Canon Rumors is reporting that an RF 300mm f/2.8L IS USM may join a previously mooted RF 500mm f/4L IS USM lens for the company's latest EOS R system.

The site claims its source disclosed that the lens would be equipped with a  “new and unique” feature for a lens of its kind, although there are no details on exactly what this feature might be.

Canon currently has five optics available for its newest mirrorless line, including the RF 35mm f/1.8 IS Macro STM and the most recent RF 85mm f/1.2L USM, while five further lenses which are currently in development are expected to surface later this year.

Neither of these rumored lenses has been included in the most recent RF lens roadmap released by the company (below).

While the company has been busy either releasing of confirming the development of wide-angle, standard zoom and mild telephoto prime lenses, the only suitable native RF telephoto lens it currently offers those looking to capture sports and action is the Canon RF 70-200mm f/2.8L IS USM (pictured top).

Existing users of Canon's DSLR lenses are, however, able to mount EF lenses on EOS R-series bodies through one of three adapters.

While such lenses would be welcome for the RF line, whether Canon plans on releasing them before a suitable EOS R-series body, one on the same level as the EOS-1D X Mark II, is unclear – incidentally, being over three years old means that camera is subject to its own rumors of a replacement.

Rumors of a third EOS R-series body have been bubbling for some time, particularly since Canon confirmed that it was working on a high-end mirrorless camera. It hasn't, however, specified whether such a model would prioritize resolution or speed as its main focus.

With the 2020 Olympic Games just over a year away, it seems certain that Canon will update either its EOS DSLR or mirrorless lines with fresh products to stave off competition from the likes of Sony, which has recently beefed up its A9 model with new firmware, and fresh FE 600mm f/4 GM OSS and FE 200-600mm f/5.6-6.3 G OSS lenses, in an effort to tempt DSLR users across.