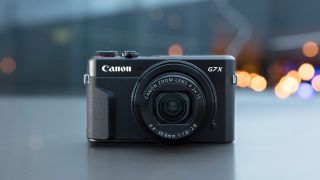 Rumors of the Canon PowerShot G7 X Mark III being announced by early 2019 could hold a grain of truth, with images of the upcoming compact appearing online late last week.

Rumor site Nokishita has published the images, which were revealed by certification agencies, along with a short list of specifications.

The leaked snapper is the successor to the Canon PowerShot G7 X Mark II – one of our favorite travel compacts – and if rumors are to be believed, it will feature built-in Wi-Fi and Bluetooth for a easy transfer of images to a smartphone for uploading to social media. It has also been suggested that the camera will boast a 24.1MP 1.0-inch CMOS sensor with a burst speed of 10fps.

Unlike the older version, the Canon PowerShot G7 X Mark III is rumored to be capable of 4K video.

None of this has been confirmed, however, so you'll need to take the rumored spec sheet with a grain of salt, but we’re expecting to see the snapper officially revealed at CES in early January 2019 in two color options – black and silver.