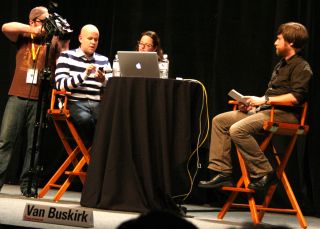 Daniel Ek wants Spotify to be on everything

Spotify could well be appearing on your games console in the near future, according to CEO Daniel Ek, as well as your TV and any other device that has access to the web.

Speaking at SXSWi this week, Ek noted that he would love to see Spotify on a number of web-connected platforms and that convergence is the key to making the music service work.

In his talk, he mentioned that Spotify's deal with 3 in the UK was working when it comes to mobile phones, but there is definitely more to come.

"We have been quite successful in Europe with our deals," explained Ek.

"What we have been able to do is give three-to-six months free Spotify usage with some smartphones.

"There has been an incredible take-up of this. Telia in Sweden has singled out Spotify as one of the three highlights in 2009 for the telco, which shows that they believe in us.

"We are seeing a similar sort of success with 3 in the UK, who is bundling the service with handsets only. Telia is bundling it with computers and TV access, however, and they are putting Spotify into set-top boxes as well."

It is this bundling with other platforms that Ek sees as the future of Spotify, noting:

"If you look at the traditional way of buying music – it still works. People are buying music that they love but the vast majority of people just want access. They want to share music with their friends. Why shouldn't you be able to consume music on your BlackBerry if you pay for it?

"We want to enable your library on all these devices. Whether it is a set-top box, whether it's an Xbox or a mobile phone – that doesn't really matter for us. We want to make music like water."

This music utopia Ek wants is still some way off, though, as the service still hasn't launched in the US – something that was not missed by the largely American audience who attended the SXSWi event.