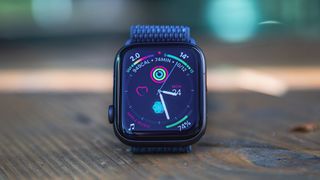 Back when the Apple Watch 4 was announced in September, the company put a big focus on its new ECG (electrocardiogram) feature as one of the main selling points, but so far you haven't been able to access it. That may be about to change.

A new report from MacRumors that cites documents the publication has found says the feature will be included in the upcoming watchOS 5.1.2 update.

Considering the latest publicly released update was watchOS 5.1.1, which came out over three weeks ago, this suggests the company may be ready to add ECG by the end of the year.

We know that watchOS 5.1.2 is in testing with beta users, but it's not currently clear when the official update will be pushed out by Apple.

As said on stage in September, the company is only including the feature for US customers at launch due to regulations it has to follow for a medical feature like an ECG reading.

The feature allows the watch to perform an electrocardiogram that detects the rhythm and electrical activity of your heart. The results of this can then be used to identify heart problems. Apple's intention here is that consumers will use it and if they find odd activity they can head to their doctor for more intensive testing.

Making a complicated test like an ECG available on a mainstream smartwatch may identify heart defects on millions faster than a normal diagnosis.

Apple has worked with the FDA (Food and Drug Administration) in the US to get the go-ahead for the feature. The company got permission to demonstrate the feature the day before the Apple Watch 4 was launched.

The company is currently trying to get its ECG feature approved in Canada, but other countries are likely to take longer.

For example, the MHRA (Medicines and Healthcare products Regulatory Agency) in the UK told 9to5Mac the process may take years rather than months.

Apple has yet to offer any clarity on when the feature will be available in other markets, but hopefully we'll see it roll out to other places around the world at some point in 2019. Just don't expect it to land on your Apple Watch 4 by the end of 2018 if you live outside the US.