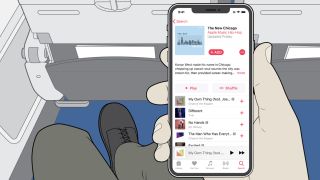 Apple Music subscribers embarking on American Airlines flights will soon be able to stream songs without having to pay for costly in-flight Wi-Fi access.

To stream Apple Music, you won't have to pay for the Viasat Flight Pass, which in the past has cost us $16 (about £12, AU$22), though you'll still need to be a paid Apple Music subscriber.

To close that gap, Apple may launch a video streaming platform. Rumors point to an April launch date and more than $1 billion invested in original programming. Apple is taking on Netflix as much as it's trying to rival Spotify.

Whether the video streaming service is a part of the Apple Music membership or a completely separate purchase remains to be seen. It's clear Apple is increasingly looking to make more money through subscription services in 2019.

Its iPhone revenue was down 15% in its latest quarter year-over-year, but Apple is bullish about its 'Services' business, which saw a 19% boost year-over-year. There's more growth opportunities here.

New incentives, like partnering with American Airlines for free streaming, will be yet another reason for users to buy into Apple Music. It's ideal if you forget to download offline music right before taking off on a flight and have nothing else to do.

But it only seems like the start to Apple's ambitious streaming plans in 2019.