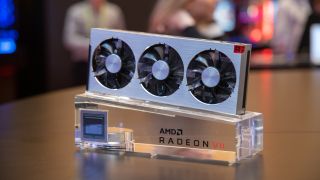 AMD’s freshly unveiled Radeon VII graphics card, which was shown off recently at CES, will come with support for Linux straight out of the gate when the GPU is launched.

The new GPU goes on sale come February 7, and according to Forbes, who spoke to a PR rep from AMD, the Radeon VII will support Linux operating systems from day one.

In other words, you’ll be able to buy a card (hopefully – more on that in a moment), and slot it straight into your Linux PC with no bother at all.

That’s different from some recent AMD graphics solutions, such as the Radeon RX 590, which wasn’t immediately supported under Linux when it launched mid-November of last year.

In fact, it took several weeks to get fully functioning drivers pushed out, a somewhat vexing state of affairs for those early adopters using Linux for gaming rather than Windows.

As you may have seen, the Radeon VII is AMD’s first 7nm graphics card, built around the Vega 20 GPU with a boost clock speed of 1,800MHz (that’s around 14% faster than the Vega 64). It also doubles up video RAM to a whopping 16GB of HBM2 memory.

Regarding purchasing one of these GPUs, concerns were recently aired that AMD would only produce a small amount of the cards initially, so we might end up seeing stock shortages (as has happened in the past with Radeon products).

However, AMD came forward to clarify that it will offer enough supply to meet the expected demand from gamers, and third-party manufacturers will be offering their own Radeon VII cards from the get-go (as speculation also indicated that might not be the case).