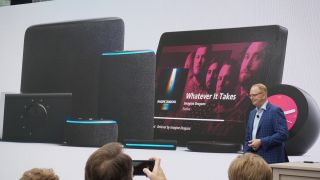 Last month Amazon announced the launch of a whole range of new Alexa-powered devices that went beyond just smart speakers. While some markets like the US get the microwave oven, wall clock and the new smart plug, for now, Australia's choices are limited to the next generation of Echo speakers... which admittedly still gives us a wide range of new gear.

Those new speakers were previously available for pre-order but, starting today, are available for outright purchase and immediate shipping across the country.

The new devices available in Australia are the 2018 version of the pint-sized Amazon Echo Dot, the second generation of the Amazon Echo Show and the Echo Plus, along with a brand-new subwoofer (which is intended to be paired with another Echo smart speaker) called the Echo Sub.

Each of these items can be bought alone, but Amazon Australia is offering freebies with some devices, alongside device bundles that can work out cheaper that if they were purchased individually.

And with Alexa having being given up update as well, these new speakers promise to be more powerful and useful than their predecessors.

Amazon promises that the third-generation Echo Dot is 70% louder than the second-generation hockey puck-like speaker, and comes with a fabric body. Of course, Alexa will always at your beck and call.

If you choose the buy the speaker alone, it retails for $79 but bundle it with a Philips Hue White starter kit valued at $139, you can score both for just $199. That saves you $19. All you need do to avail this offer is to select the Philips Hue option on the right-hand side box and both items will be added to your cart, which will then automatically reflect the reduced price. Three colour options are available for the speaker – Charcoal, Heather Grey and Sandstone.View Deal

Amazon has given its biggest speaker a makeover, making it better looking than the predecessor thanks to its fabric finish. But the retail giant has also given the internals a boost. The Echo Plus now makes use of 3-inch neodymium woofer, and a 0.8-inch tweeter, for punchier bass and clearer mids and highs respectively. You can now even pair two Echo Plus devices for stereo sound.

The all-new Echo Plus retails at $229 a pop, but for a limited time comes with a free Philips Hue extension bulb. Just be sure you select the right type of bulb for your holder – bayonet or Edison screw. The Echo Plus is also available in three colours – Charcoal, Heather Grey and Sandstone.View Deal

The second-generation Echo Show features a Full HD 10-inch screen and an upgraded audio system that includes two side-firing speakers and one passive radiator. That means you get great image quality along with big sound. There’s also a 5MP front camera for video calls and taking pictures, plus you can connect any smart security system to keep an eye on your property.

The new Echo Show will set you back $349, but you also get a Philips Hue bulb for free for a limited time. You’ll need to select the Edison screw or bayonet cap option in the right-hand box, which will add the item to your cart. Unlike the other new Echo speakers, the Echo Show is only available in Charcoal and Sandstone.View Deal

If you already own an Echo smart speaker, you can get bigger sound for less than $200 by wirelessly pairing it with the all-new Echo Sub. There aren’t too many features to boast of here, but you will get 100W of deep bass sound through a 6-inch woofer.