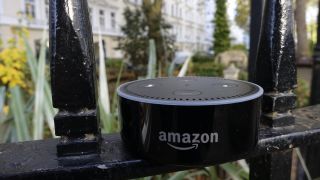 Not content with simply announce a new addition to its Echo line of smart speakers, Amazon continues to upgrade Alexa in the hopes it becomes your go-to digital assistant.

Amazon will soon add yet another ability to Alexa's repertoire in the form of notifications — giving users spoken updates from Alexa on what's new across a selection of the digital assistant's 12,000-plus skills.

Like most of Alexa's talents, catching up on notifications is as easy as a voice prompt such as, "Alexa, what did I miss?" or "Alexa, what are my notifications?" to their Echo or other Alexa-compatible devices.

According to Amazon, companies like AccuWeather, The Washington Post, Just Eat, and Life360 will be among the first to update their skills with notification functionality as the feature begins rolling out to developers.

Introducing Notifications for Alexa, a way to proactively signal new content is available from skills and domains: https://t.co/eif7pXiuuX pic.twitter.com/LBtyNBxg87May 16, 2017

While Amazon doesn't have a hard date for when notifications will make their way to the Alexa-using public, the feature will be opt-in per applicable skill and can be temporarily muted or deactivated completely at a user's choosing.

It's been a busy growth period for Alexa, as Amazon also announced new skills like Google Account support, improved voice recognition, and taking calls within the past month.

As for competition, we believe Google hasn't been sitting idly by with its competing Google Home smart speaker, as it's rumored to be adding some features of its own soon.

Seeing as the Google IO 2017 conference kicks off tomorrow, we won't have to wait long before learning what the team behind the Google Assistant-powered smart speaker has to offer against Amazon's Alexa.