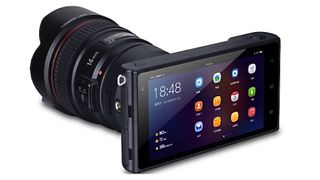 Chinese photography accessories manufacturer Yongnuo has revealed that its developing a new mirrorless camera that will be powered by Google’s Android operating system.

Codenamed the YN450, Yongnuo has listed some of its new camera's features on its Facebook page. The list includes Android 7.1 Nougat as its operating system, built-in 4G connectivity and support for Canon’s EF lenses.

Yongnuo has also revealed that the interchangeable lens camera (ILC) will feature a 16MP micro four thirds sensor, alongside a Qualcomm octa-core processor.

Among the Yongnuo YN450’s other assets is a large five-inch 1080p multi-touch rear display. There will also be 3GB of system memory and 32GB of on-board storage. If 32GB isn’t enough, Yongnuo says it can be expanded by another 32GB, although no specific mention has been made of an additional microSD slot.

The camera will be able to capture 4K video at 30fps, and will come equipped with a 3.5mm headphone jack, support for a stereo mic, built-in GPS and dual LED flashes. There will also be RAW image support and a 4,000mAh battery.

What makes this upcoming camera interesting – along with its Android OS – is its support for Canon’s EF lenses. This brings us to the question of the YN450’s dimensions.

Canon EF lenses are built for SLRs that have a flange distance of 44mm. That’s the distance between the lens mounting flange (metal ring) of the camera body and the film on which the image is formed. The flange focal distance determines whether a lens from one system can be mounted to a camera body of another system using an adaptor.

To ensure a lens' ability to focus to infinity, the flange distance needs to be greater than the depth of the camera body. In this case, since Yongnuo has announced the YN450 is a micro four thirds camera – which typically have a flange distance of 19.25mm – it could potentially mean the new camera body might be rather hefty for this type of system if it is to accommodate for the lens, the adaptor and the on-board circuitry.

Not a bite of Pie

Another point to note is that the use of Android 7.1 Nougat, which was released in 2016. With new-generation smartphones already running Android 9 Pie, it makes the new camera seem a tad antiquated. However, we hope that the OS can be upgraded as newer versions are released.

Nothing else is known about the camera at this point, not even the final name. Yongnuo has opened the naming up to the public, with a competition currently being hosted on its Facebook page. The company will reveal the final name of the snapper in January 2019, and we hope we’ll get more information on pricing and availability then.