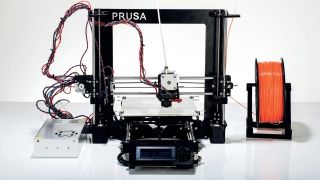 The idea of 3D printing is fascinating; set a printer going in a public place and it's sure to quickly gather a crowd. The basic technology is amazing to watch, as layer upon layer is built up to create a 3D object.

Fused Filament Modeling (FFM) is the most popular process and it will be this type of 3D printer that we'll look at in this tutorial. The basic principles of FFM are incredibly simple; a thin thread of plastic, known as filament, is melted and pushed through a small nozzle, this nozzle is accurately moved around a print platform in order to slowly build up layers.

The process put into its simplest terms is much like using an icing bag and nozzle to create three-dimensional cake decorations. Although the technique is simple, the technology that makes it possible is incredibly advanced and precise, and luckily with relatively recent advancements in micro controllers – such as the Arduino board – and stepper motors – such as the Nema 17's – the accuracy and price of the technology is now accessible to everyone.

Accurate control with the use of these boards and stepper motors has made it possible for the maker community to get involved with building their own and adapting designs. The starting point for any FFM project is the ground-breaking work or the RepRap project.

The work of Adrian Bowyer and his team established today's 3D print revolution and now anyone who wants to build a 3D printer at home has the ability and for a minimal outlay. There are plenty of 3D printer designs out there, and the majority are based around the original work of the RepRap project.

One printer that has evolved from RepRap is the Prusa i3, which is a very simple printer that's capable of achieving incredible results if built correctly.

In this tutorial, we're going to use a Prusa i3 as the foundation, and discover the importance of components – such as the hotend and extruder – and how these and other components relate and can be changed and upgraded. There really is no better way to discover 3D printing than to build your own.

Why build a 3D printer

Have a quick look online and you'll see that the price of 3D printers is now relatively cheap. An XYZ Da Vinci Jnr can be purchased for as little as £250 (around $366, AU$490) for instance.

Prusa does sell kits and pre-built printers, and the quality of the parts and ability to upgrade is extensive compared with other cheap kits. Cheaper printers such as the XYZ are good but limited to the materials and quality that they can print, and cheap kits from the internet generally use cheap parts and it's often difficult to get them to print consistently.

By building your own 3D printer you get to learn about every aspect of the machine and process. This not only enables you to better understand the way things work and how to correct them when or if they go wrong, but you also get a better understanding of how to make your printer print better.

As you go through your build you'll discover that there are many parts that will need a tweak or adjustment, so it's worth knowing how each component relates to the rest of the printer especially if you do need to venture online for help.

Buying a kit is the cheapest way to gather together all of the parts, so even if you don't use the hotend and extruder supplied it will still work out cheaper than buying all of the parts individually. A company that buys in bulk and puts a kit together will be able to sell you the complete kit for less than you could put that kit together yourself.

When it comes to buying a kit, the two companies that are worth a look at are Prusa, the original designers of the printer or Ooznest who produce a decent version of it.

If you decide to go it alone then you'll need to download the source files for the Prusa i3. One of the issues here is that in order to print the parts to build the 3D printer you need a 3D printer.