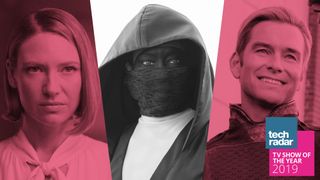 We're drowning in new TV shows in 2019. With more streaming services joining the fray this year, and more to come in 2020, the problem is definitely less about the lack of choice than it is about not having enough time to watch everything we'd like to.

Below, you'll find the global TechRadar team's picks for the best TV shows of 2019. The process was very simple: we were each given five points to assign to our favorites on a long list, which included new and returning shows. The shows below got the most votes. Where there were a couple of ties in the voting, we adjusted the order based on what we felt made the most sense for the list. But, there was only one clear winner in the bunch...

To think: a few months ago we didn't even have Baby Yoda in our lives (and by next year, worn down by memes and merchandise, the world will surely have turned on him). And The Mandalorian concealed this fantastic secret from us right until the launch date of Disney Plus, allowing us to think this was just a bounty-of-the-week procedural.

The first live-action Star Wars TV show isn't revolutionary as weekly sci-fi dramas go, but there's a lot to love: the confident lack of dialogue in favor of visual storytelling, the refreshingly short running time, the criminal underworld-focused angle on the Star Wars universe, and the movie-quality effects brought to life with a hefty budget. This bodes well for the future of Disney Plus shows.

Where to watch: Disney Plus

The Good Place had the perfect first season, trapping four characters into what appeared to be heaven with a devilish final twist. In subsequent seasons, what's kept this show to a high standard is how it's cleverly remixed that premise in different ways. This year the show places Eleanor (Kristen Bell) and the other characters in charge of an experimental neighborhood in the Bad Place, another fascinating spin on the core idea.

The Good Place still has the best joke writing on TV. And, crucially, the producers have smartly decided to end the show in 2020 after just four seasons – a sitcom of this quality deserves to finish on its own terms.

After a wait of more than two years, David Fincher's serial killer-focused true crime drama returned with a fascinating, frightening and grisly second season. The first half continues the first season's pattern of interviews with famous serial killers, including Charles Manson, while the second half offers an arc about the shocking and still-unresolved Atlanta child murders.

The show approaches the subject delicately rather than exploitatively, which is a fine balance to aim for given the media's current fascination with true crime. It remains must-see viewing due to the show's trio of engaging leads – Holt McCallany's Bill Tench really comes into his own this year, dealing with his own potential psychopath of a son, and balancing that tension with his challenging line of work. And directors Fincher, Andrew Dominik and Carl Franklin give the show's visual style the kind of attention that makes it feel genuinely cinematic.

This thrilling assassin drama, adapted by Phoebe Waller-Bridge from the best-selling Villanelle novels, should be on any must-watch list. Unfolding as Sandra Oh’s MI6 operative tries to track down the mysterious hired killer Villanelle (Jodie Comer), it’s a smart and sexy subversion of the usual male-fronted crime drama, with a globe-trotting and utterly gripping story. It’s no surprise that Waller-Bridge helped to pen the upcoming James Bond movie, No Time to Die, after this thrilling two-season spy thriller cemented her place on the map.

Where to watch: Hulu, BBC iPlayer

Silicon Valley, HBO’s hilarious series which follows the plight of a tech startup, had its sixth and final season in 2019. For tech fans, Silicon Valley is essential viewing, with its sharp takes on the current plight of the tech industry woven into a storyline which isn’t so far removed from reality that you don't start wondering – and worrying – whether what transpires on-screen could actually happen.

The core characters are a wonderful blend of socially awkward, nerdy, a little desperate and just a bit dickish. While it’s sad to see the end of Silicon Valley, it feels right, with the storyline having naturally run its course; and the final instalment does justice to the previous five seasons and ties up the whole package in a more pleasing way.

In the words of maverick billionaire Russ Hanneman, THIS. SHOW. FUC…..

Between Killing Eve and Fleabag, Phoebe Waller-Bridge is one of the best things to have happened to television. Her original comedy series, Fleabag – adapted from a one-woman stage show – managed to be devastating and cuttingly funny, handling the painful ways family, friends, and lovers hurt each other as deftly as a surgeon wielding a scalpel.

The arrival of ‘hot priest’ Andrew Scott in Season 2 certainly helped it gain a place on this list; but the mature way in which Waller-Bridge manages to achieve closure for the show’s characters in a second season is what makes it a truly landmark series for 2019. We’re just sorry we’re not likely to see any more.

As painful as it is to say goodbye to BoJack Horseman, the final season of the incredible animated series is as impactful, heartbreaking, and outright silly as we’ve come to expect from one of Netflix’s earliest original shows.

Following the eponymous horse and washed-up sitcom star, Bojack, as he attempts to grapple with trauma, depression, and alcoholism beneath of bright lights of Hollywood (you read that right), this is a show that constantly pushes the limits of what a cartoon comedy can be.

Season 6 resumes in January for another 8 episodes, but the half we’ve already seen – with its mish-mash of meet-cutes, high-stakes kidney heists, and evil billionaire whales – certainly hasn’t disappointed.

Where to watch: Netflix

Between The Boys and Watchmen, 2019 was a great year for unusual takes on the busy superhero genre. In The Boys, superheroes are treated like celebrities, behave monstrously and are commodified by corporation Vought International, a reflection of what it would be like if comic book-style figures existed in the real world. The titular Boys are the anti-cape group that exist to make them pay for their crimes.

Shaking off some of the grimmer aspects of its source material, though, The Boys has an oddly tender heart at its center. There's certainly a lot of appeal in Karl Urban swearing his way through scenes as Billy Butcher, with his confusing cockney-smashed-into-Australian accent. But it's the relationship between new Boys recruit Huey (Jack Quaid) and newest member of The Seven Starlight (Erin Moriarty) that guides the show, while the mystery behind Butcher's missing wife has a couple of nasty twists.

Bring on season 2 of The Boys.

Fans of Damon Lindelof's previous show, The Leftovers, probably had an inkling that his adaptation of the Watchmen graphic novel would be similarly textured. But this show has surprised and amazed in many ways: for one, it's a full-blown sequel to the graphic novel by Alan Moore and Dave Gibbons, with tons of Easter Eggs and numerous returning characters.

But the show's loftier achievement is the way it explores racism's history in the United States and generational trauma, using the world of Watchmen as an alternate-history backdrop. Standout episodes pile up in this first (and perhaps only) season, and to spoil any of it would be to ruin a twist-heavy show that's more than worthy of the source material, and a high bar for future shows based on comic books.

One of the hardest-to-watch shows of the year, and memorably terrifying, Chernobyl is a period drama that nonetheless taps into present-day concerns around information suppression and spin. Not only did Craig Mazin and Johan Renck's miniseries depict the 1986 explosion of the nuclear reactor and its immediate effect on rescue workers and citizens, it examined the Soviet Union's refusal to accept that the situation was as critical as it was.

With an excellent ensemble cast headed by Jarred Harris and Stellan Skarsgård, Chernobyl is a credible and detailed period drama – it's well worth checking out HBO's official Chernobyl podcast to learn more about how the show got made.

After Game of Thrones ended, we wondered how a TV event could ever capture that widespread level of attention again, given how splintered audiences now are by the number of TV shows pumped out in any given week. Then, one week later and on the same network, Chernobyl came along and emulated the achievement. Great TV can evidently still find the audience it deserves, even when we've got more to watch than ever.

Where to watch: HBO, Now TV