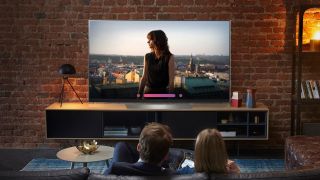 How times have changed. It wasn't long ago that the idea of cinema-quality visuals in your own home was a laughable idea – held back by TV panel sizes, screen resolutions, and overall smaller expectations for the experiences to be had on the small-screen. Now though, creating a home theater system worthy of big-screen movies has never been more within reach.

TVs are getting bigger, for one. The average television sold today will come in at 55 inches, while 65-inch TVs are the fastest growing part of the market. Those TVs are also able to pack in 8 million pixels of detail (for 4K) – or even 33 million pixels for the 8K TVs now entering the market, though there isn't really enough 8K content out there to justify that quite yet.

The growth of 3D audio and surround sound also means your living room hi-fi can recreate cinematic audio on the small scale, all in the comforts of your own home.

So what kit do you really need to make the best home theater setup out there? We've put together this handy list of the best gadgets in every category: TVs, soundbars, speakers, and 4K Blu-ray players, with links to our relevant guides if you want to customize for your own tastes and needs.

The smartest TV on the planet?

For that real sense of cinema, what you really want is an OLED TV. While OLED isn't as bright as an LCD TV, those deep blacks make a huge difference to the dynamic range of the image. It’s also capable of vibrant and gorgeous colours, not to mention an astounding level of detail with native 4K content – across all 55, 65, and 77-inch sizes.

Combining a stunning display with an immense amount of features and formats – with LG's brilliant webOS smart platform – this is undoubtedly one of the best 4K TVs ever made. There aren't huge differences with last year's model, but the addition of the 2nd Gen a9 processor means the picture processing is truly top-notch. You also get Dolby Vision and Dolby Atmos support (premium video and audio technologies) though not the competing HDR10+ video standard.

There are more expensive LG models in the range: notable the W9 and E9 OLEDs, though you're mainly paying for the fancier form factor (if that matters to you) and bigger audio output – which you won't miss when you're using a soundbar or external hi-fi setup.

There's some tough competition between TVs these days, and most on our best TV guide would make for an incredible viewing experience – but nothing looks quite as 'cinematic' as an OLED display.

A Dolby Atmos experience with maximum performance and minimum fuss

While high-end TVs are increasingly upping their game for built-in speakers, nothing compares to an external hi-fi system to really make an impact.

Don't be fooled into thinking a soundbar isn't enough for your home theater setup – especially the Samsung HW-N950, which is actually a fully-fledged audio system with additional wireless rear speakers and a subwoofer to place around the room. You get 7.1.4 channels of immersive audio, compatible with both Dolby Atmos and DTS:X for one of the best home audio experiences you could ask for, whether movies or music is your jam.

You may wonder at doing without a full-on AV receiver – and you might prefer the latter if you're wanting to plug a lot of different hi-fi equipment aside from the HW-N950's kit. The HW-N950 only has two HDMI inputs, though if it's just for your television, who cares?

The elephant in the room here is 3D audio, which has become increasingly good at giving single soundbars or speakers the ability to recreate multi-channel sound. For true surround sound, though, you'll want a setup like this that allows you to place various speakers around the room.

While more and more 4K-quality content is available through smart TV apps like Netflix and Amazon Prime, how many pixels you end up seeing will depend on the strength of your internet connection – and investing in a 4K Ultra HD Blu-ray player can be a sensible way to ensure you get the most of your favorite 4K Blu-ray movies.

The DP-UB9000 is Panasonic’s latest flagship 4K Ultra HD Blu-ray player and, after Oppo started winding down its competing devices, the new model finds itself in one of the top spots in the high-end player market.

Beautifully made and enviably specified, this flagship 4K disc spinner is unashamedly premium. Beyond its good looks, however, the DP-UB9000 is also the first UHD deck from Panasonic to support all the key HDR formats: vanilla HDR10, its dynamic sibling HDR10+, HLG and Dolby Vision.

You'll need a television that can support those formats, of course: Dolby Vision and HDR10+ are competing formats, with LG TVs backing the former and Samsung sets packing in the latter. If you like all your kit being on-brand, the higher-end of Panasonic TVs now bundle in both, and should sit nicely above your new Blu-ray player.

Sometimes your television just isn't enough. Home cinema projectors are able to go above and beyond the sizes of standard TV panels, and the BenQ HT3550 proves that with its adjustable 120-inch size and 30,000:1 contrast ratio.

The picture quality itself won't match the premium TVs listed at the top here – and you won't get the dynamic HDR formats like Dolby Vision or HDR10+, either, but if you're entertaining a big crowd, or just want the biggest viewing experience in your home possible, then a projector may be the way to go.

While it might have been nice if the projector could get slightly brighter, given the fact that with enough ambient light it can put a serious damper on the overall image quality, we think the BenQ HT3550 is arguably the best way to go if you’re looking for a great projector in the $1,500/£1,500 price range.