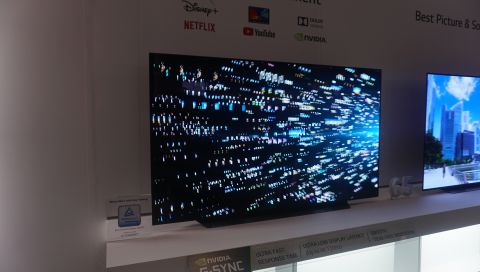 The CX will miss out on a few premium features saved for the more expensive GX, WX, and ZX sets, such as far-field voice recognition, while any change to the TV stand could harm its audio credentials – but it will likely offer the best compromise of price and performance in the LG OLED range, just like the C9 before it.

The LG CX OLED TV is sure to be a set of much of interest in the year ahead. The combination of picture quality, sleek design, premium built-in audio and LG’s winning webOS smart platform made 2019’s LG C9 an OLED TV for the history books. And while there have been some changes to its successor, the same benefits should still be on show.

In a TV lineup with a few shake ups – namely the cancellation of the E Series OLED, and the introduction of a new ‘gallery’ G Series display – the question is whether will the C Series keep its crown for another year.

We got to go hands on with the LG CX at the CES 2020 expo in Las Vegas; while it hasn’t been through our full, in-depth testing process, this is what we’ve garnered from our time with it so far.

A new year, a new model. The LG CX doesn’t veer too far from the design of its predecessor, with a similarly slim panel and pleasingly small bezel. It will be available in the same 55-inch, 65-inch, and 77-inch sizes – with a brand new 48-inch model too for more compact homes.

One of the notable aspects of the C9 OLED was its TV stand, which used a curved design to funnel audio from its downward-firing speakers toward the viewer. The CX model we saw on display had a distinctly flat stand without the same kind of capability, but it’s possible we viewed a placeholder ahead of the final design.

We do know from the official product listing that the CX will have the same 2.2 channel speakers and 40W output, in a downward-firing configuration, though we’ll have to wait and see if the stand plays a similar role this time around.

CX owners will also be able to connect Bluetooth speakers to the television in various configurations – as a front speaker, rear speaker, or in stereo. While it likely won’t replace a serious audio setup, it does give more options for surround sound, and is heartening to see after the patchy Bluetooth connection we found on the LG E9 when watching with over-ear cans.

But what of the performance? The CX model – like the GX, WX, and ZX OLEDs launching alongside it – will make use of a new a9 Gen 3 processor, rather than 2019’s a9 Gen 2 chip.

We’re told to expect some small improvements in picture quality, with new algorithms that improve textures, reduce video noise, and enhance motion processing – all of which we’ll have our eye out for in our full review.

But there is some brand new tech alongside these minor improvements, including dedicated facial recognition to ensure consistency and color accuracy of skin tones (pictured below) as well as picture settings that automatically detect the kind of content that you’re watching – switching to ‘cinema’ or ‘sports’ mode without you having to comb through the settings menu.

The success of the C9 OLED certainly bodes well for the new CX model, which should boast comparable picture quality, a market-leading smart TV platform, and capable 2.2 Channel audio to boot.

The upgraded processor should only be a good thing, and the CX’s pride of place in LG’s OLED lineup seems assured, especially now that the E Series OLED has been phased out. We’re hugely excited to see the smaller 48-inch model, which could prove a runaway success if it gets the price point right.

The CX will miss out on a few premium features saved for the more expensive GX, WX, and ZX sets, such as far-field voice recognition, while any change to the TV stand could harm its audio credentials – but it will likely offer the best compromise of price and performance in the LG OLED range, just like the C9 before it.