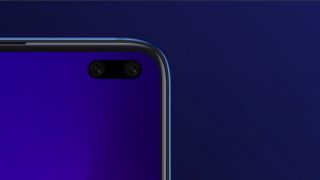 The Xiaomi Redmi K30 will be its next affordable flagship. It is already confirmed to be 5G capable, but a new report states that it will be powered by a MediaTek chipset.

Back in November, Xiaomi held a small conference in China where the GM Lu Weibing confirmed that the device will be 5G-enabled. He even shared a teaser image of the front which showed very slim bezels and a punch-hole notch with two selfie cameras. As we approach its early-2020 launch date, more details have surfaced, giving us a better idea at what to expect from the Redmi K30.

A new post on Weibo states that the Redmi K30 5G will be powered by a MediaTek chipset and not a Snapdragon, one which the previous leaks pointed at. Earlier this year, MediaTek did confirm that it has a 5G chipset in development and should be available at scale in early 2020, matching the Redmi K30’s launch time frame. Very little is known about this chipset, including its name, but the company has mentioned that this will be its flagship SoC when it launches. It will be built on a 7nm manufacturing process and will be considerably cheaper than the competition.

European countries, as well as China, will be in the first phase to receive the 5G MediaTek chipset. In contrast, India will be a part of the second phase, and could see a non-5G variant of the chipset being implemented which could also bring the costs lower.

Back at IFA 2019, Qualcomm also announced that it would be bringing 5G to the Snapdragon 600, 700, and 800 series chipsets. But it seems like this time, MediaTek will take the crown. If the rumor is to be believed, this will be the second time Xiaomi has opted to go for a MediaTek chipset for its popular smartphones, following the Redmi Note 8 Pro, which was powered by the MediaTek Helio G90T gaming chipset.

The Redmi K20 was an excellent device that brought a lot of industry firsts to a never-before-seen price point. It seems like Xiaomi wants to continue that trend with the Redmi K30 series by making them the cheapest 5G smartphones around. We should hear more about these devices in the coming months as the launch is not too far.