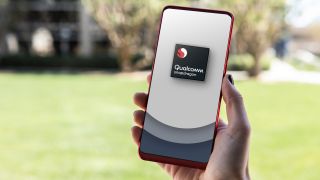 The upcoming flagship Qualcomm Snapdragon 865 benchmark scores might just have been revealed via a Geekbench listing.

Qualcomm’s next flagship processor will be unveiled later this year and will power high-end smartphones starting early 2020. However, a new listing on Geekbench seems to reveal some interesting bits of information along with how powerful the Snapdragon 865 is going to be.

The listing mentions a device running Android 10 with 8GB of RAM. The chipset, codenamed “Qualcomm Kona” has 8 cores with a base frequency of 1.80 GHz. This likely to follow a Gold and Silver arrangement such as the SD855 where four Gold cores are clocked at a higher speed for performance-heavy tasks while the remaining four Silver cores taking care of efficiency.

Samsung Foundry has been selected as the manufacturing partner for the Snapdragon 865, using the new 7nm EUV-based fabrication process for better thermal performance and efficiency. Mass production is reportedly going to commence in February 2020. For reference, the Snapdragon 855 was manufactured by TSMC.

5G is going to be one of the talking points of the Snapdragon 865. Earlier this year, the internal names for the SD865 suggested that there are two models in development, with the main difference being 5G capabilities. It’s unclear whether “Kona” or “Huracan” will be the 5G variant. The non-5G capable variant should be cheaper to procure and will be used for countries such as India where 5G infrastructure is still not in place. This will be the first time a Snapdragon chipset will natively support 5G, as the Snapdragon 855 series needed an additional Qualcomm X55 modem for that.

The benchmark is likely to be from a Snapdragon 865 reference device and does not accurately represent what the SOC can do. Other expected upgrades include the move to LPDDR5X RAM standard and support for faster storage such as UFS 3.0. The new flagship Snapdragon processor could debut on the Samsung Galaxy S11 in February 2020.