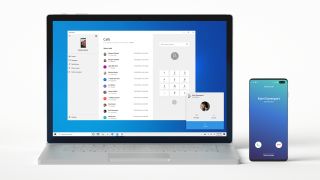 The Your Phone app’s ability to make phone calls is now rolling out to all users on Windows 10, following extensive testing of the feature.

Windows testers received the functionality last October, but now everyone is getting it, giving folks the ability not just to text from their desktop PC, but to actually make phone calls with their Android handset.

The idea of Your Phone is to link the PC and phone closer together, allowing you to receive notifications from your smartphone on the desktop, for example, and benefit from the convenience of replying to texts with a keyboard.

Taking calls on your PC is another reason why you might never need to pick up your phone again (or at least not be reaching for it nearly as much, anyway).

MSPoweruser spotted this development and noted that enabling the phone calls feature requires permissions on your PC (unsurprisingly).

As to what you can actually do with this functionality, it allows you to make or answer calls on your PC as you’d expect. For making phone calls, there’s an in-app dialer and the ability to initiate a call directly from your contacts list.

And when there’s an incoming call, you don’t have to answer it – it’s possible to send it to voicemail, or alternatively decline it with a predefined message. Your Phone also allows users to seamlessly transfer a call between phone and PC, and it keeps a log of recent calls.

In short, it’s a very handy addition, and it comes on top of a ton of work that Microsoft has been doing of late to the Your Phone app. That includes transforming your PC’s touchscreen into a giant digital art pad for your phone (allowing for support for pressure sensitivity). Plus there’s potentially a nifty content transfer feature in the pipeline, to allow for the easy shuttling of files between PC and smartphone.