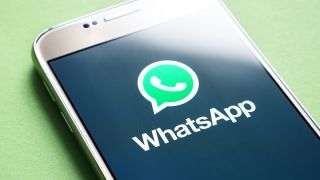 WhatsApp dark mode is nearly here, and if you're part of the Android beta program you can already take it for a spin before it's rolled out worldwide. So what is it, why does it matter, and when will it roll out?

WhatsApp dark mode is a new design for the hugely popular messaging app, which will swap its current palette of light gray and green for shades of black, teal and midnight blue. It won't replace the current look completely, but will be available as an option for anyone who wants to use it.

There are several reasons why you might want to try it. First of all, some users find dark backgrounds easier to look at for long periods of time, as there's less glare than you get with a light colored interface. Darker screens also use less power (particularly if your device has an AMOLED display, as explained in the video below. Finally, it just looks cool.

How to get WhatsApp dark mode

WhatsApp dark mode is now available for beta testing, so you can take it for a spin right now. Bear in mind that some features and colors might change before the final release, based on the results of the testing.

To get WhatsApp dark mode, you'll need to sign up for the beta program through the Google Play Store (the beta program for iOS is currently full). There's no need to reinstall the app on your phone; next time it's updated, you'll receive the current beta release (2.20.13 or later).

To check which version you currently have, long-press the app icon and select 'App info'. If you don't have the latest version, you can download any available updates by visiting the WhatsApp page in the Google Play Store and look for an 'Update' button.

If there's no 'Update' option visible, you can also download the APK for WhatsApp 2.20.13 and install it manually.

Once that's done, restart the app and tap 'Settings' in the top right corner, followed by 'Chats'. You'll see a new 'Theme' option at the top. This will let you choose between light and dark modes, and if you're using Android 10, you'll be able to choose 'System default' to match the app to your system-wide settings. If you're using Android 9 or earlier, you'll be able to activate dark mode whenever your phone enters Battery Saver mode.

Now that WhatsApp dark mode is available for beta testing, we know that it will be mostly dark gray, with green accents and status messages in yellow.

Before the beta release appeared, it looked as though we would be seeing at least two different dark modes – one of which would be optimized for AMOLED screens. Assets tucked away in earlier APKs suggested that there would be up to three variants available, including one with a solid black background. These black pixels would be switched off on an AMOLED display, helping save as much power as possible.

However, this option doesn't seem to be available in the beta release. It's possible that it might appear in a future update, but we won't hold our breath; WhatsApp is so enormously popular, it makes sense for parent company Facebook to want to keep it as simple as possible to avoid confusing users.

What else is on the way?

We don't know exactly when WhatsApp dark mode will be rolled out globally, but it's possible that it might arrive in a major update at the same time as self-destructing messages, which will be deleted automatically after a certain period of time.

Based on leaked screengrabs, it looks as though you'll be able to set messages to be erased after a period between five minutes and an hour. Rival messaging apps Facebook Messenger, Telegram and Signal already offer a similar feature, so it's an overdue addition to WhatsApp.

Beta releases have also revealed a new option that will allow you to completely hide updates from muted contacts. Currently, if you mute a contact, their updates will appear grayed out, but still visible. When the new update rolls out, you'll be able to hide them fully, and only see them if you choose to.

One thing that we're not expecting any time soon is a sudden influx of ads. Parent company Facebook recently revealed that it's disbanded a team who were working on ways to slide advertisements into your group chats.

The company still intends to insert ads into WhatsApp's little-used Status feature (which is very much like Stories on Facebook and Instagram) but you shouldn't find yourself bombarded with promotional messages any time soon.

Other ways to extend battery life in WhatsApp

One of the main reasons you might want to try dark mode for WhatsApp is to extend battery life, but there are other ways to make the app less power-hungry until the setting becomes available.

Enter the app's settings, select 'Chats' and tap 'Wallpaper', then choose 'Solid color' and select something darker than the standard pale gray background. This won't change the color of the message bubbles, menus and other interface elements, but Google's research has found that black pixels drain substantially less power than other colors.

By default, WhatsApp will download a lot of files in the background, which can really drain your phone's battery, so you can also conserve power by opening WhatsApp's settings and selecting 'Data and storage usage'.

Activating your phone's own power-saving mode is another way to make it last longer between charges. Depending on which setting you choose, this may turn down the brightness of your screen, stop apps sending and receiving data when they run in the background, and limit CPU speed. It's up to you whether you're willing to take the performance hit in order to extend your battery life.