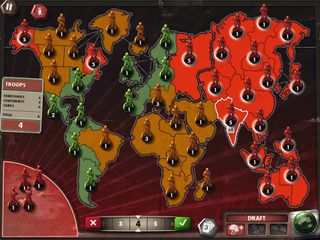 Risk is one of our favourite strategy games, and the iPhone and iPad app is excellent

Like pretty much every other Hasbro property that's been converted to an iOS game, Risk (£1.99, iPhone; £4.99, iPad) arrived courtesy of EA.

Rather like Scrabble, Monopoly and Battleship, Risk is a solid, playable reworking of the original and is agreat app to start with for any fans of the board game.

You get the traditional Risk layout, a couple ofrule sets, local multiplayer across devices, and lashings of polish through engaging and well-designed animations and sound effects.

On the iPad, we'd argue the game's a touch pricey (although EA has regular sales, so hang on for a bit and grab yourself a bargain), and the game also lacks online multiplayer.

We found too that even the Extreme difficulty level wasn't that tricky to beat by playing in abold (risky!) manner, but the game nonetheless gave us many happy hours of world conquest.

Because Risk has a fairly simple rule-set, it's one of those games - like Scrabble - that enterprising developers have used as the foundation for their own creations. In many cases, these come across like 'Risk plus', and that's fine by us, given that the EAgame doesn't expand on the original concept.

Lux DLX 2 (£2.99, Universal) is essentially 'Risk with new maps'. You get five with the game itself, but dozens more are available for download, mixing ancient, modern and fantasy worlds. (There's also the free, Universal, Lux Touch, perfect for skinflints hankering for Risk action - it's pretty basic and not a patch on EA's official game, but it does the job.)

And then there's Blood & Honor (£1.49, Universal), which makes small tweaks to the rules that, perhaps surprisingly, dramatically change how you approach the game. Rather than the cards you play merely bringing in reinforcements, their effects are far more varied.

You can knock out enemy armies using air strikes and atomic weapons; it's possible to assassinate a territory's general to scupper the opponent's next go; and you can improve defences through resistance movements and 'treacherous' alliances.

The game also throws optional command centres into the mix (lose that territory and your entire civilisation is wiped from the map). The net effect of these changes is a hugely enjoyable and fresh take on Risk, albeit one that we found extremely tough, not least because the AI tends tohave a savage all-or-nothing approach.

Conquist 2 does this through four game modes. World Domination works much like the original Risk, but Secret Mission gives you a set task for victory (such as eliminating a specific opponent - rather like Super Mission Risk in the board-game version).

Colonization has you holding your capital and control the others to win, while Castle apes Colonization but cedes your entire territory to any player that conquers your castle. The game's futuristic graphics are also a big change from a typical Risk board, though, the animations really slow the game down (you can turn them off).

Conquist 2 also differs from EA's game in offering an online mode, which is one area in which ones of our favourites, Strategery, also excels. We shudder to think about how many hours we've lost on online battles in Strategery's abstract worlds.

The game also scraps continents (reinforcements are solely based on your largest section of linked territories) and restricts the number of armies that can be stationed in any one place, thereby removing the ability to stockpile. It's one of the most strategic of the Risk-type games on the system and is without doubt the one we recommend most highly.

The remaining titles we unearthed are rather more radical departures from the basic Risk formula, although we think they're all games that fans of the board game will enjoy.

The mildly baffling Slay (£2.49, Universal) transports you to a medieval island composed of hexagons. As your territories expand, you can 'build' peasants to seize more land, or combine them into units that can attack enemy structures and troops.

Slay's core gameplay is pretty deep, but we found this the most inaccessible of the games on test and were regularly frustrated by the difficulty in keeping track of territory finances, which is pretty important since the game immediately kills all your troops if a territory goes bankrupt. So: be warned.

The trio of Galcon games by Phil Hassey is rather more intuitive, with its simple prod-based gameplay; Galcon takes Risk into space, sets it in real-time and then, to add to your woes,massively speeds everything up - it's not uncommon for an entire conflict to be over within minutes.

In Galcon, territories are planets, and the bigger the planet, the faster it can build new resources. Your aim is therefore to balance conquest with defence, ensuring you don't isolate important parts of your galactic empire.

Of the three games, the original Galcon (£1.49, iPhone) remains our favourite; but if you tire of it, Galcon Labs (£1.49, iPhone) adds some new twists on the basic formula, while Galcon Fusion (£1.49, iPad) more or less combines the two iPhone games but gives you relative acres of space for longer battles. (They last for two minutes instead of one.)

Galcon also has a robust online multiplayer component, but beware ofseasoned players, who'll wipe you out without asecond thought - especially on Galcon Fusion, where you play against people using the more efficient interfaces of the PC and Mac versions.

For gamers who find Galcon's very open attack pathways too much to deal with (any planet can attack any other), army game Modern Conflict (69p, iPhone; £1.99, iPad) sort of merges Galcon with Risk, offering similar territory and resource management to Galcon, but forcing ground units tostick to rigid pathways while helicopters can fly wherever they want.

Like Galcon, Modern Conflict offers unlimited randomised maps, but it also has a campaign mode with 33 missions across America, Russia and China, which should keep most single-players engaged for some time.

Finally, Quarrel Deluxe (£2.99, Universal) arrived as our deadline rampaged menacingly towards us, but nonetheless looks set to challenge Strategery as our favourite game in this genre. Itcombines Strategery's territory-based battles with amusing cartoon AI players and tense Scrabble-style word-game face-offs, with the Countdown timer thrown in for good measure.

Liked this? Then check out Tap! magazine for more apps, games and kit reviews for iPhone, iPad and iPod touch.