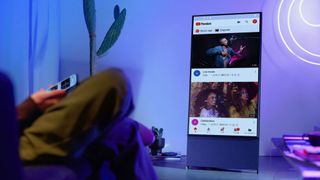 As if we weren’t already spending enough time watching videos on our phones, now we’ve got a TV that’s trying to pretend it’s a smartphone screen, too. It’s not the first time we’ve seen the vertical-oriented Samsung Sero TV, but CES 2020 has revealed it’s coming to Western markets too.

Samsung’s Sero TV can work in a traditional horizontal format, but is able to turn on its side for playing back vertical, portrait-style video without black bars either side. It sits on a stand that prevents it hitting the floor when turning, and can be paired with a phone so that it automatically orientates it correctly based on what’s beamed from the handset.

Also within that stand is a 4.1-channel speaker system, with 60W output - stats that make it a cut above your average screen in terms of audio power.

At just 43-inches, the QLED display runs at 4K resolution, but isn’t packed with as much top screen imaging tech as higher end Samsung screens.

This is very much a display aimed at teens then – which makes a lot of sense, when you consider the amount of content being filmed and consumed in a vertical orientation as to better fit smartphone user’s habits. Social media platforms like TikTok and Instagram, for instance, primarily deal in vertical video.

But is this the shape of things to come? Vertical TV shows are being commissioned to meet the viewing habits of younger audiences – Australian show ‘Content’ is filmed entirely in a vertical orientation and, somewhat fittingly, follows the exploits of a wannabe internet influencer. Chinese internet giant Tencent is also producing similar shows.

Pricing and availability are yet to be revealed, but the Sero will be leaving Korea and headed to the US and “several global markets” later this year.