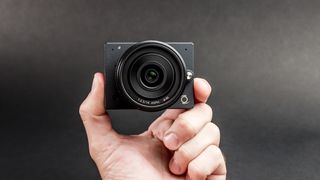 Now a new camera company simply called Z has come out with something with a device that takes the best of both worlds. Meet the E1 camera, which it claims to be the smallest 4K camera that also uses interchangeable lenses.

Encased in a magnesium housing, the E1 is just about twice as big and heavy as a GoPro camera. However, the camera is still eminently pocketable and it comes packing a larger Panasonic Micro Four Thirds image sensor.

What can it shoot?

For plain old Full HD footage, the camera can record 1,080p video at 60 frames per second. Z Camera is also working on implementing 120 frames per second video for slow motion action likely at a lower resolution.

On the photo side, the E1 Camera takes 16MP RAW and JPG images. Decent low-light performance will also supposedly maintain high image quality up to 6,400 ISO, meanwhile, the E1 has a maximum ISO sensitivity of 102,400.

Users will be able to arrange their composition on the rear LCD. However, with a tiny resolution of 320 x 240, you might be better off using the accompanying smartphone, which pairs with the E1 over Wi-Fi and Bluetooth Low Energy.