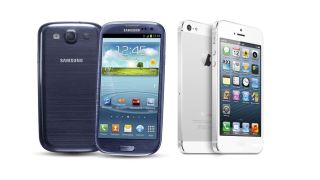 The Galaxy S3 and iPhone 5 cornered the market in 2012

Apple and Samsung have gobbled up all of the smartphone spoils in 2012, leaving their competitors to break even or worse.

According to figures collected by Canaccord Genuity, the two electronics powerhouses combined snagged 103% of the industry's operating profits for the year, with Apple scoring the lion's share at 69%.

To achieve a number greater than the whole, the 103% figure includes the loses made by some of the other big names in consumer tech. Sony, Motorola and Nokia all found themselves in minus figures, LG and BlackBerry broke even, while HTC scrapped over the line with 1% of the market's profits.

Speaking with Apple Insider, Canaccord analyst Michael Walkley notes that he doesn't know of anything in the short term that should shake Apple and Samsung from the top spot.

Hopefully Walkley's predictions prove conservative. Companies like BlackBerry, Sony and HTC are responsible for some of the most important innovations in phones since the launch of the iPhone, and it would be a shame to have this stifled by a two horse race. Perhaps HTC's 'ultrapixel' camera could be what it needs to dip its hands back into the industry's pot of gold.