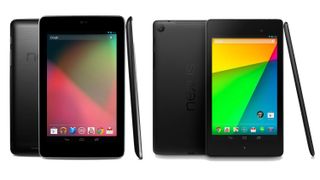 How do the two 7-inch slates stack up?

Google's original Nexus 7 tablet blew the bottom end of the tablet market wide open last year with top specs and a low price, but how does it stack up against its leaner, meaner brother of the same name?

Rather confusingly we're going to have to refer to the two tablets by the year they were made, as they both sport the Nexus 7 name - no "Nexus 7 2" here, but that's a minor blot on what are a couple of impressive devices.

There's no surprise that the new Nexus 7 (2013, date fans) has a better spec sheet than its predecessor, but we're going to take a detailed look at how the two compare.

The first thing you'll notice between the two is the design. While both obviously have the same size 7-inch display, Google (well actually Asus, the firm behind the creation of both tablets) has fine-tuned the body of its latest offering.

Measuring 114 x 200 x 8.65 mm the new Nexus 7 (2013) is actually fractionally taller than the original (although only by 1.5mm), but it's got noticeably thinner in width and depth making it just that little bit easier to hold with one hand.

The one handed operation is further aided by a drop in weight for the Nexus 7, down from 340g to a delicate 290g on the new version - making it considerably lighter than the Amazon Kindle Fire HD (395g), Nook HD (315g) and the larger, yet thinner iPad mini (308g).

Couple that size and weight with a fully rubberized rear and the new Nexus 7 (2013) is just as easy, if not easier, to handle than its predecessor, while still maintaining a solid build - although neither ooze the same premium finish as Apple's smaller tablet.

We're treated to stereo speakers on the rear of the new Nexus 7, with a strip of speaker holes running across the top of the tablet, and a broken strip towards the base - broken by the bump for the microUSB port.

Gone is the four pin dock connector found on the bottom left side of the old Nexus 7, replaced by exactly nothing on the newer version, while the headphone jack has been shifted from the base to the top of the tablet.

The new Nexus 7 seriously steps things up in the display department, boasting a stunning 7-inch, full HD display which sports an eye-popping 1920 x 1200 resolution and 323ppi pixel density - compare that to the 1280 x 800, 216ppi original Nexus 7 and you get why it's such a step up.

Both the Nexus 7 (2013) and Nexus 7 (2012) use the same LED-backlit IPS LCD screen technology, and while colors don't pop as they do on the Super AMOLED displays we get on some smartphones, the quality is still top notch.

Put the two tablets side by side and the new Nexus 7 clearly has the beating of its predecessor in real life as well as on paper, with sharper, brighter images and crystal clear video playback. Beautiful.

Operating system is less of a close run thing as both tablets now run the latest version of Google's platform - Android 4.3 Jelly Bean.

The new Nexus 7 launched running Android 4.3, while the 2012 version kicked things off with Android 4.1, although it has subsequently been updated to 4.2, and most recently 4.3.

This means that both the new and old Nexus 7 tablets offer up the same functionality and features, although the inclusion of a rear facing camera on the new Nexus 7 obviously offers something additional.

As these are both Google's own-brand products we'd expect the tablets to be hastily upgraded to Android 4.4 KitKat, which is rumored to launch in mid October.

The original Nexus 7 was certainly no slouch with a 1.2GHz quad-core processor and 1GB RAM, but once again the new Nexus 7 ups the ante with 1.5GHz quad-core chip and 2GB of RAM.