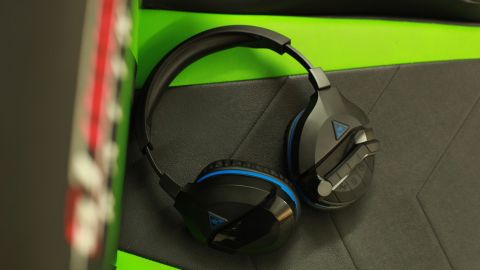 A mid-priced PS4 headset packed full of functionality, the Turtle Beach Stealth 700 covers almost all the bases you could possibly need from a console gaming headset including active noise-cancellation and wireless connectivity. Only a somewhat middling battery life and occasionally clunky controls prevent it from getting a perfect score.

Of all the current crop of games consoles, Sony’s PlayStation 4 is the most geared towards wireless gaming headsets – the Xbox One, for example, annoyingly forces all headsets to connect to its controller via a wire.

Meanwhile, in the modern world of videogames, with increasing emphasis on the multiplayer side -- which brings the need to communicate with team-mates -- a gaming headset is fast becoming a necessity.

On paper, Turtle Beach’s PS4-specific version of the Stealth 700 looks like an attractive buy. But does it live up to that promise in use?

In the general scheme of wireless console headsets, the Turtle Beach Stealth 700 comes with a mid-range price-tag of £129.99. Cheaper headsets cost in the region of £90, and you can carry on beyond £200 if you happen to possess a personal money-tree.

But the Stealth 700 has a decidedly high-end specification, which includes DTS Headphone:X surround sound, active noise cancellation, Turtle Beach’s Superhuman Hearing sound equalization (which highlights the footsteps of incoming enemies when playing first-person shooters) and Bluetooth connectivity (useful for accepting input from mobile phones and the like).

Setup proved to be pretty simple – as it should be with a headset designed for a specific console. Although there was, inevitably, one omission from the setup guide which required recourse to Turtle Beach’s website: toggling the active noise cancellation on and off (a simple matter of tapping the power button, it turned out). The Stealth 700 comes with a USB wireless dongle which hooks up to the PS4’s optical input, with which it was paired out of the box; manual pairing proved simple enough.

Ergonomically, the Stealth 700 scores well. It has three buttons on the left earcup for power, Bluetooth setup and toggling Superhuman Hearing on and off - wisely, headphone and chat volume levels are controlled by two sliders.

The stubby microphone can be clicked upwards and muted.

There’s a microUSB slot for charging (a cradle would have been nice, but you rarely get those with mid-priced headsets). It also comes with Turtle Beach’s clever system for accommodating a pair of glasses without squeezing them into your head.

The Stealth 700 has a wealth of functions for controlling Bluetooth devices with which it is paired, including taking incoming calls when you’re listening to music on your phone, fast-forwarding to the next track and so on.

But those controls are somewhat arcane, involving multiple button-presses and recourse to the setup guide. There’s also a 2.5mm jack for connecting devices physically, which also means you can use a Stealth 700 with Sony’s PlayStation VR.

Aesthetically, the Stealth 700 is solid and practical, rather than ostentatiously luxurious. Build quality is high – it’s a very robust-feeling headset which should be able to withstand plenty of abuse. But it eschews exotic materials in favour of tough, high-end plastics, except for the ear-cushions and rubberised cushioning on the band. It can’t be faulted in terms of comfort – as it’s neither the bulkiest nor heaviest of headsets (unlike some of its wireless rivals), you can happily wear it for hours at a stretch without discomfort.

Sound-wise, the Stealth 700 goes big. It has a quite distinctive, warm sound with tons of deep, rumbling bass – the sort of sound you might expect in a cinema, and it does a fine job of adding drama and immersion to your gaming.

It has a strong, dynamic mid-range, too, and a top end which is precise and free of any hint of shriekiness, albeit less prominent than the other frequency bands. It manages to sound both exciting and inviting, and you’ll love it if you seek a warm sound; less so if you crave a neutral sound above all else.

If you crank the volume up to full, a bit of bass boominess creeps in – but it’s a very loud headset, so by that stage, you will have reached intolerably ear-splitting volume levels.

Those warm characteristics also lend themselves well to listening to music on mobile devices via Bluetooth, effectively counteracting the tinniness of MP3s and their ilk.

At a quoted 10 hours, battery life isn’t the greatest, but in this instance, quoted battery life tallied with what we achieved in use, which is refreshing. And 10 hours should be adequate for the needs of all but the most fanatical of MMO players – you really shouldn’t be spending that long playing a game at a single stretch. Bigger batteries add weight and bulk to headphones, so less-than-sensational battery life would appear to be something of a pay-off for the comfort that the Stealth 700 offers.

Overall, the Stealth 700 is a great all-round gaming headset, which should appeal to all types of PlayStation 4 owners. It sounds superbly atmospheric, really pitching you deep into the drama of whatever game you’re playing.

It has all the features that you’re likely to really need, with top-notch surround-sound bringing an edge when playing action games, and active noise cancellation that comes in handy if you tend to play games in noisy environments.

Plus it works well as a set of Bluetooth headphones when on the move. Given the feature-set and sound quality, it represents pretty decent value for money, and will make a much-appreciated present for any PS4-owning gamer you know.