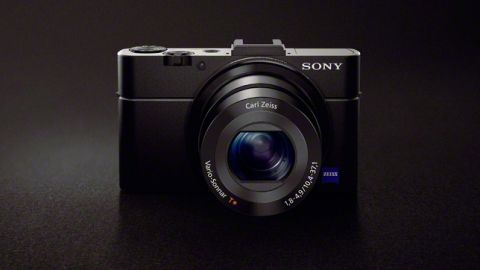 The Sony RX100 Mark II is a high-end compact camera

We tipped the original Sony RX100 as the best compact camera of its class available on the market today. That is, a premium compact camera with a smaller than APS-C sized sensor. With a raft of welcome improvements, it's fair to say that the Sony RX100 Mark II steals that crown now, making it incredibly worthy of your lust.

Last year's Sony RX100 has proven popular with both critics and consumers, becoming the top-selling premium compact camera at various points over the past 12 months.

[Update: The RX100 II (referred to as the DSC-RX100 II by some retailers) has since been replaced by four newer cameras, with the latest being the RX100 VI. However, Sony still keeps all previous models in its RX100-series line-up, and while the RX100 doesn't feature the latest and greatest tech, it's still a great buy if you're on a budget.]

Here on TechRadar it won the title of best premium compact camera, beating the likes of the Canon G15, Nikon P7700 and the Fuji X20. It is unique in the market for now, because it features a one-inch (type) sensor, which is significantly larger than the devices found in similar cameras on the market.

Now, Sony is releasing an RX100 Mark II version of the camera, keeping many of the same specifications but with a few notable improvements. It will be sold at the same time as the original RX100, which Sony says will remain on the market until at least Christmas 2013.

First up is the sensor, which keeps the same 20.2 million pixel resolution and physical size, but is now an Exmor R device, meaning it is backlit. This should make it perform better in lower light conditions. The maximum sensitivity has now also been increased to ISO 12,800.

The camera keeps the same 3.6x optical zoom Carl Zeiss lens, which offers an equivalent focal length of 28-100mm (in 35mm format) and a maximum aperture at the wide angle of f/1.8. Sony tells us that it was important to keep the f/1.8 specification in particular, since this was an especially popular feature.

One of the most significant changes to the build of the body of the camera is the screen, which keeps the same 3-inch size and 1,229k dot high resolution, but now tilts both upwards and downwards for shooting at awkward angles. Anyone who was hoping Sony would include a touchscreen on the RX100's successor will be disappointed, because the company is still electing not to include one.

In terms of usability, the new camera's biggest upgrade is probably the addition of Wi-Fi connectivity. This is also the first Sony compact camera to feature NFC connectivity, which is something that's becoming increasingly popular. Both these features mean you can control the camera remotely via a smartphone or tablet, as well as download your images to your device.

One of the criticisms of the first Sony RX100 was that it lacked a hotshoe or port, meaning you couldn't attach accessories such as a viewfinder or microphone. Sony has rectified this by including the same Multi Interface Shoe as found on other Sony cameras in its NEX and Alpha ranges.

The number of premium compact cameras now on the market is fairly high, with pretty much every manufacturer offering some kind of option. The Sony RX100 II therefore has a good number of competitors, but it is probably most closely matched by the Panasonic LF1 or Olympus XZ-2.

Of course it actually has the same size sensor as found on the Nikon 1 interchangeable lens system, so it's also somewhat a competitor for those cameras, albeit without the ability to change lenses.

Its small size and zoom lens mean that it sits below the ultra-premium APS-C and full-frame compact cameras currently on the market, including the Ricoh GR, Nikon Coolpix A, Fujifilm X100S and Sony's own RX1.