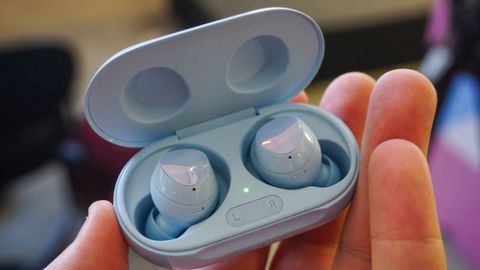 The downside? The new Samsung Galaxy Buds Plus lack high-end audio codecs and higher IPX4 rating that the Apple AirPods Pro have.

The result are earbuds that are a significant improvement on their predecessors and an overall decent package. They lack some of the niceties of pricier earbuds and are uncomfortable to wear in bed, but are a good option for folks who can't be bothered to charge their earbuds every day.

At $149.99 (about £115 / AU$220), they’re a bit more expensive than last year's Samsung Galaxy Buds, but they're both a little cheaper than their biggest competitors, the Apple AirPods, and significantly cheaper than the best true wireless earbuds of 2020, the Sony WF-1000XM3.

Unfortunately, however, neither the Samsung Galaxy Buds Plus nor Apple AirPods Pro support higher-end audio codecs like aptX, aptX Low Latency or, even better, LDAC. For now your only options are SBC and AAC – though the inclusion of the latter means the Buds Plus will work with iOS.

The biggest criticism that we can levy against the Samsung Galaxy Buds Plus is, though, is that they don't offer active noise cancellation nor do they provide much in the way of passive noise reduction. That means, if you plan on wearing these out and about, expect to hear a lot of the outside world while listening to your music. That's fine if you're at the gym and don't mind hearing a bit of the background noise or if you're at the office and still want to be able to hear what coworkers are saying nearby, but those looking for total aural isolation will have to look elsewhere.

As far as dual-driver true wireless earbuds go, there's a lot to like about the Samsung Galaxy Buds Plus. They have great clarity and a good mid-range. They're not as bass-heavy as we might've liked, but what's on offer is far better than the previous iteration.

Not having noise cancellation or a higher level of water resistance are two of the Buds' biggest weaknesses, but its lower price, new iOS compatibility and extended battery life should help it keep pace with the AirPods and AirPods Pro.