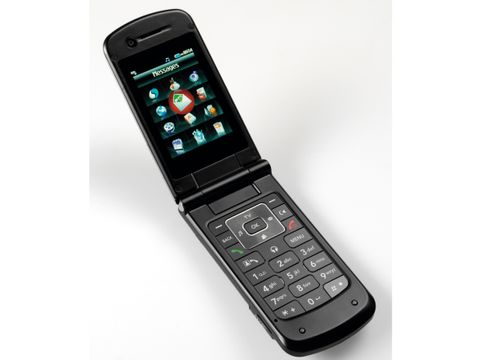 The clamshell design may not be as attractive as the original's slider, but this is still a good-looking phone

Resistance seems to be futile. Everyone who sees and touches it can't help but be seduced by the Chocolate phone. LG's sleek, smooth, dark sliderphone handset was one of the sales sensation of 2006, winning admiring glances wherever it went.

The secret of KG800, as the LG Chocolate was otherwise known, was its outward simplicity. This was made possible using subtly crafted touch sensitive controls that only appeared and lit up when you needed them, a feature that ensured that the phone stood out from the crowd and felt significantly different to handle.

The success of the model means that LG now has its own selection box of Chocolate phones lined up for its Back Label marque, with a family of models available to suit a variety of tastes.

The latest version, however, is by far the most technologically advanced to date. The U830 not only becomes the first in the range to offer 3G operation - it goes one better by offering the highest possible download speeds through HSDPA (High Speed Downlink Packet Access) connectivity.

This is yet another LG model that network operator 3 has picked up as an exclusive in the UK, and it is currently being sold only to the network's contract customers. It's a great handset for 3, as its supercharged HSDPA service (offering potential data download rates up to four times the speed of regular 3G) is already in place, and should offer download speeds of up to a maximum 1.8 megabits per second to all UK users.

This version does not have quite the drop-dead gorgeous design simplicity of the KG800, because the first 3G version is a flip-phone rather than a slider. This complicates the exterior design, and leaves the touch sensitive controls simply as a neat way of controlling the MP3 player.

The good news is that the aesthetic loss is an ergonomic gain. This quirky touch sensitive does not get in the way of the serious tasks that your phone has to perform - and the keys revealed when the phone is flipped open are big and easy to use. In short, the new model is effectively a 3G version of the LG KG810.

Advancing beyond GSM/GPRS operation, however, makes this a very different phone. You get the obvious things like fast video downloads and video calling. But this handset has been set up to make the most of 3's multimedia information and download services, and this includes a fastkey to the ever-increasing number of mobile TV channels the network offers, plus full access to the internet from the handset.

TV picture quality is watchable enough in normal streaming mode but comes alive if you blow the image up to fit the whole 320 x 240 pixel screen. There is some pixellation on streaming to contend with, although watching downloaded or copied video footage is exemplary and overall it can provide excellent mobile entertainment.

Curiously, a speakerphone facility is provided for TV, MP3 and camcorder usage, but not when answering phone calls. But then you can always use the headset. A neat trick of the supplied stereo earbuds is that they are in two sections, providing an inline volume adjustment, and also allowing you to swap to use any headset with standard jack socket.

The MP3 player is definitely the star performer for the handset - and not just because of those funky redlight controls that illuminate when you press a button on the side of the phone. The sound quality even with the included headset blows your ears away, and is a class above your average mobile phone's sonic performance, based on our tests with an eclectic mix of downloads.

The device supports a range of popular digital music formats, including MP3, AA, AAC , AAC and WMA files. Stereo Bluetooth support means that you also have the option in investing in a wirefree listening system, should you want to try out some Bluetooth headphones (or speakers).

Curiously, the phone does not seem to have an expandable flash card memory. But it makes up for this by coming with a full 180MB of internal storage out of the box. This may be enough for most users. But although there is no microSD slot, this phone is one of the first to support the MaxiSIM. As its name suggests, this is a new generation of SIM designed to handle all the modern users memory needs, as well as providing their subscriber identity.

The Israeli inventors Msystems have recently bought out by SanDisk, making it more likely that the idea will take off; the system already offers a current maximum storage capacity of 1GB. The bad news is that networks themselves will have to support and issue the cards - so these may take some time to become widely available.

The camera gets an upgrade from that found on previous Chocolates, with the U830's shooter offering a maximum picture resolution of 2 million pixels. This is supported with a menu system that offers a wide gamut of manual overrides and photographic effects.

The flash, however, is one of the most underpowered we have yet seen on a mobile, and there are no macro facilities or focusing controls, so the camera struggles with close-ups. You do get a secondary camera, primarily aimed at video calling, but it is capable of taking VGA quality stills. Video footage can also be shot at a maximum resolution of 320 x 240 pixels.

In field tests, the camera does not quite live up to its paper specification. Exposure is more miss than hit - with a marked problem with contrast and overexposed highlights, even in relatively subdued daylight.

This is no smartphone, but the appeal of the LG clamshell is that it provides a low-cost and low-bulk route into 3G. This handset is just 15mm thick, and tips the scales at a very reasonable 93 grams, which is still unusally compact for a 3G handset.

The Chocolate phone pedigree may give it some additional cachet, but this non-slider version of the handset is not actually a style stunner in the same way as its predecessor, and the high-gloss black exterior ends up being rather too effective at showing up greasy fingerprints.

For those looking for great MP3 performance, and TV on the go, however, without paying a fortune, the LG U830 is a worthy contender.