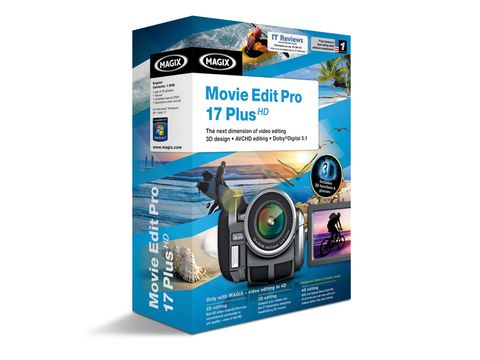 With native support for 3D camcorders, this video editing suite currently has an advantage over the rest of the field

Magix Movie Edit Pro 17 Plus HD claims to be the 'world's first 4D video editing program'. A bold claim, but it goes on to explain that the fourth dimension is 'speed', as this is the quickest and most resource-light version yet.

It certainly feels quicker than previous versions and proved faster than both Adobe Premier Elements 9 and CyberLink PowerDirector 9.

The main screen has a look in keeping with the majority of other suites, with a nice amount of space for the playback panel, as well as an attractive Timeline display. We like the layout of this package, as there is enough in the basic outline to edit and export videos without it getting too complicated, while experienced users can locate Advanced Tools from the toolbar.

We found importing video was quick and editing a movie together is relatively simple. Playback proved satisfactory with no sign of lagging, while rendering and exporting was better than in the past.

This is the first video-editing suite we've come across that has full support for 3D video camcorders. You can import 3D footage, as well as make the most of the array of effects that are bundled with the software.

It's not the only 3D suite on the market, but it's certainly one of the cheapest. There is even a pair of 3D glasses included in the box. You'll need a laptop with a screen that runs at 120Hz or, as in our case, an external monitor, and even then you'll find it can be tricky to get a perfect image.

There are plenty of other new features on offer, such as uploading videos to Facebook, YouTube and Vimeo, in Full HD. If you don't need the full-blown package, there is a Classic version aimed at first-time users which costs £60 (inc. VAT).

Magix Movie Edit Pro 17 Plus HD is a well-rounded package, but is better suited to those with editing experience. The 3D features are fun and work really well, opening up options the other packages here simply can't offer.