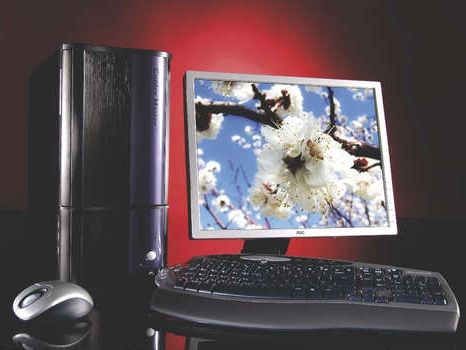 A larger monitor would have been a bonus

When you're choosing a video and photo editing PC, a large case probably isn't high on your list of priorities. Yet the Zoostorm's bulk does have its advantages, such as five drive bays (two are currently occupied) which makes it easy to add more hard drives. Although the case is big it's still quite stylish, with rounded edges and a neat front panel covering the drives.

The silver AOC monitor comes with a stand that offers a good range of height positions. There's little adjustment elsewhere, though, and the horizontal viewing angles were a little below par. You need to position the monitor with care, then, at which point you'll see the display in its full 1,600 x 1,200 resolution glory.

This is a little too much for a 20-inch monitor, so text is relatively small, but it's good for editing. Images are crisp and sharp, too, although a little dull, and colour balance takes a while to get right. These aren't fatal issues, but this wouldn't be our first choice of display for a graphics workstation.

The Zoostorm is powered by an AMD64 X2 5000 CPU with 2GB of RAM, both of which came out on top in their respective performance tests. The two hard drives only managed second place at 61MB/s, but the fact that they both offer 500GB, giving you one terabyte of capacity in total, is ample compensation for us. It still did well enough for the system to win first place in PCMark 05.

Elsewhere, the Zoostorm doesn't impress quite so much. The GeForce 7600 GT graphics card lags a little behind others in gaming speed, for instance, although it's still capable of decent frame rates. Like the Mesh Photo 5000, you're only supplied with a 2.1 speaker setup and the warranty is just one-year on-site only.

Still, with features like a memory card reader, three FireWire ports and all that hard drive capacity, this PC does deliver most of the features you'd expect from a graphics-oriented PC. At the headline price of £1,299, that's really not bad at all.