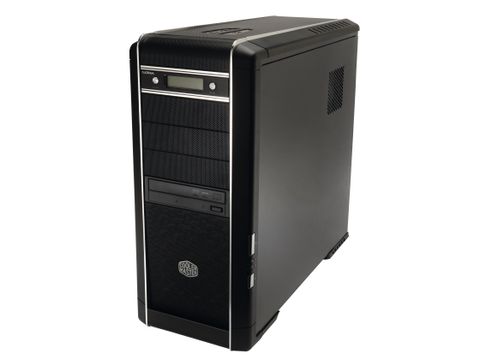 A powerful PC that mere mortals can afford. Premium pricing may have had its day.

Building a games machine for the future is like attempting archery while attached to an ethanol drip. Although the target is right in front of you, every second you spend concentrating your aim sees it lurching further into the blurry recesses of 'over there'. Thankfully, Cyberpower has fired this particular volley at the early stages of drunkenness; it's a veritable futurebox.

It sounds like it's got a portable wind tunnel in the case, and the 700W PSU probably saps just as much power as one. And we could have done without the only-mildly-useful Game and Watch-esque front panel status display, which shows a man inexplicably digging a poorly realised LCD hole. But there's so much goodness in there; 8800GTs running in SLI are only the start. Vista, usually the sweary uncle at an otherwise enjoyable family dinner, has been placated with the finest hardware booze.

That said, the 4GB RAM included (as two sticks, meaning there's room to expand further) has necessitated the use of the 64-bit version. This is a curse in some ways - woe betide if you fancy using a peripheral with an unsigned driver - but we're seeing it become more and more of a necessity if you want a gaming machine with any sort of serious performance. And performance isn't something that this machine is short of. It stomped on 3DMark06 with a very reasonable score above 12,000, and the twin graphics cards made short work of Lost Planet's geometry, scoring far higher on the complex Snow test than most rigs.

You'll forgive the noisy case, considering all that wind keeps the core temperature below 35 degrees, even under heavy stress. But will you forgive yourself for picking up an NVIDIA SLI rig a few months too early? The 650i chipset will be superseded in a couple of months, and your friends will point and laugh because you don't have a 780i. Wait a little longer and you'll get a better processor for the price, too. But let's be honest; you'll wait forever for a future-proof machine, because such a thing logically cannot exist. Buy this package, value-packed and tasty as it is, before you go completely mad...